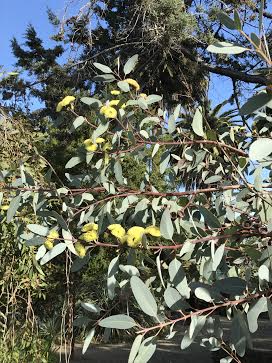 Eucalyptus preissiana is one of a number of species known in Australia as “mallees”.  The term is applied to plants which have a swollen base called a lignotuber, from which multiple stems usually arise.  In case of fire, the plant can re-sprout from the lignotuber. Though mallees can grow as small trees, often they have a shrubby habit, as is the case with Eucalyptus preissiana, which grows to be about 8 feet tall (2½ m).  The common name of “bell-fruited mallee” is applied to this species in Australia, though it is not common enough in California to have acquired a common name here. 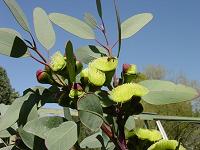 Eucalyptus preissiana is a spring bloomer, coming into flower at the Ruth Bancroft Garden in late March to April.  The young buds are topped with a rounded reddish cap which is forced off by the cluster of yellow stamens within as they enlarge and mature.  Like other kinds of eucalypts, it is the burst of stamens which provide the floral display, since the petals have been modified into the cap which is sloughed off.  In the case of Eucalyptus preissiana, the flowers are large and showy (about 2 inches or 5 cm across), and the bell-shaped base enlarges to form the seed pod which gives the plant its Australian common name.

Many eucalypts have sickle-shaped leaves which taper to a long point, but those of Eucalyptus preissiana are oval and blunt-tipped.  They are thick and are blue-green in color, contrasting nicely with the purplish-red tips of the 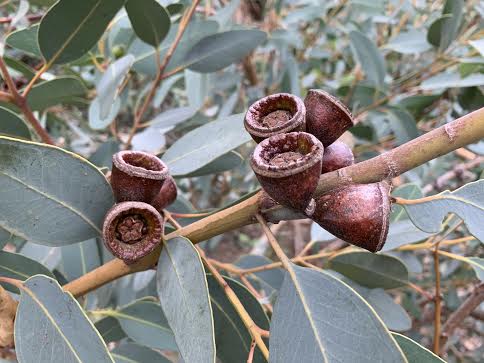 branches.  This makes the plants attractive garden subjects even when not in flower. They are native to the winter-rainfall region in southwestern Australia, so they require little supplementary water in California gardens, and they are hardy down to at least 20° F (-7° C).