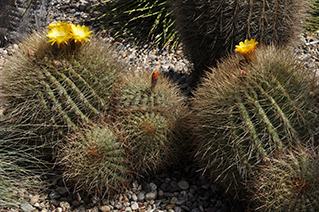 Northwestern Argentina is home to a wide assortment of wonderful cacti, many of which have sufficient cold-tolerance to endure even our coldest winters in Walnut Creek, when temperatures plunge to 20-25° F (-4° to -7° C). Among these are many species of Echinopsis. The genus Echinopsis as recognized today includes cylindrical-stemmed plants formerly placed in Trichocereus or Helianthocereus, small globular plants formerly placed in Lobivia, and the South American barrel cacti formerly placed in Soehrensia. Among the latter group is a densely spined species named Echinopsis formosa, which may be single or make offsets to form a cluster. The flowers are normally yellow, though orange and red-orange plants have also been reported. 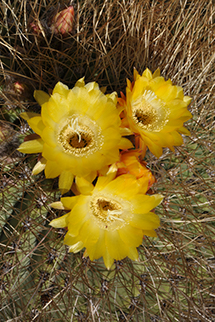 At the Ruth Bancroft Garden we have several plants of Echinopsis formosa. Some of these, formerly known by the name Soehrensia ingens, are clustering round-bodied plants with honey-colored spines. Others, formerly called Soehrensia formosa, are short-cylindrical, single, and have whitish spines. The largest plants of each kind have attained a diameter of 16” (41 cm), and the tallest of the cylindrical ones has reached a height of 28” (71 cm). These are slow-growing plants, and i 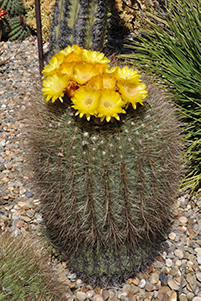 t has taken over 30 years for them to reach this size.

Echinopsis formosa is a spring bloomer, flowering at the Ruth Bancroft Garden in late April and May. The large yellow funnel-shaped flowers are up to 3½” across (9 cm). Our plants took a long time to reach flowering size, but now that they are mature they put on a dazzling show each year.  In nature, they grow in the eastern foothills of the Andes, to the west and northwest of Buenos Aires.