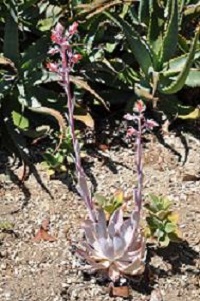 Among the echeverias which flower in the summer is a beautiful species named Echeveria cante, from the central Mexican state of Zacatecas.  When this plant first found its way into cultivation, it was thought to be a form of Echeveria subrigida, which occurs a considerable distance away to the south and the southeast.  Both of these have large leaves with a coating of powdery white, but he leaves are shaped differently and the flowers are distinctly different.  Still, it was not until 1997 that Echeveria cante was finally described as a species.

Echeveria cante can grow to be quite large as echeverias go, with rosettes over a foot across (up to about 40 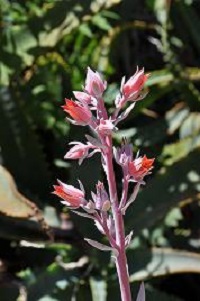 cm).  The powdery whiteness of the leaves is complemented by a reddening at the margins, and the whole rosette can be tinted lavender under some growing conditions.  Plants occasionally make a few offsets, but usually they are single.

The flower stalks emerge in summer, with flowering commencing in July at the Ruth Bancroft Garden.  A plant normally has one or two inflorescences, rising to a height of 1½ to 2 feet (45-60 cm), with multiple short side branches bearing several flowers each.  The whole stalk and its bract leaves, and even the pink outsides of the flowers, look as though they had been whitewashed.  This makes the red to orange color of the flower’s interior stand out.