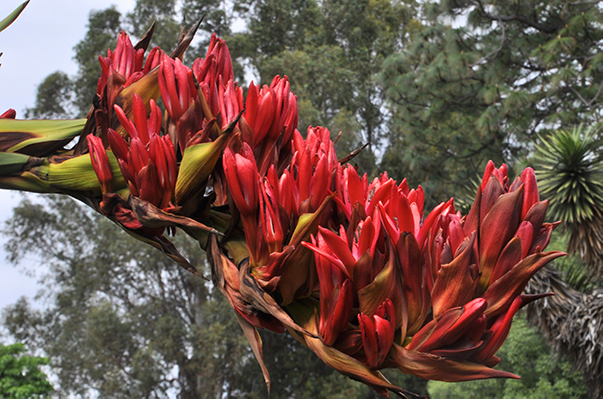 Doryanthes is a genus of only two species, both native to eastern Australia. At one time these plants were placed in the Agave Family (Agavaceae), but they are now classified as the only two members of the family Doryanthaceae. Both species have large stemless rosettes of sword-like leaves, with Doryanthes palmeri being the larger of the two. D. palmeri has a small distribution along the border between the states of Queensland and New South Wales in eastern Australia. 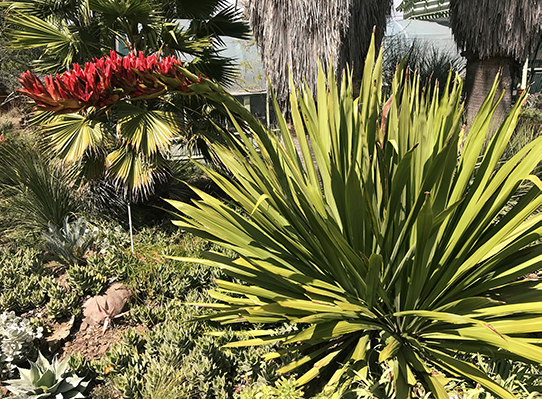 The leaves of Doryanthes palmeri are up to about 8 feet (2½ m) long and 8 inches wide (20 cm) at the widest point. There are ridges with intervening furrows running down the length of each leaf. The new leaves are erect, while the older ones spread outward. D. palmeri begins life as a single large rosette, but when it comes into flower the growing tip elongates into a flower stalk, much like an Agave does. This means that the original rosette cannot keep growing, but new rosettes emerge around the original one so that the plant continues. 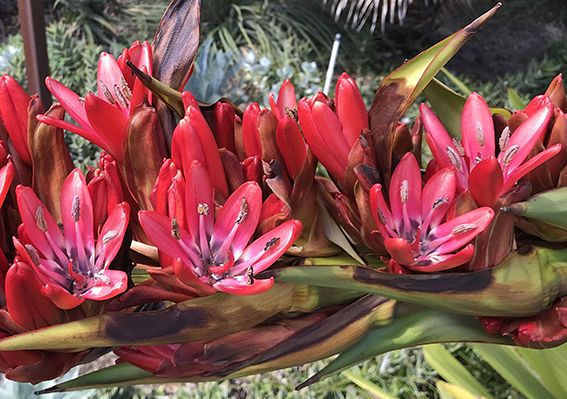 Spring is the main flowering time for D. palmeri, with flowering at the Ruth Bancroft Garden beginning in late March. By sometime in May the primary burst of flowering has finished, but occasional additional flowers come out at intervals on into the summer months. The flower stalk is up to 10 feet (3 m) long and arching to the side rather than growing straight up. The lower part of the stalk is clad in pointed green bracts, while the upper part holds many clusters of large cupped upward-facing thick-petaled flowers. These do not all open at once, nor do they open in sequence from bottom to top (as an Agave would). Instead, different flowers in each cluster open in succession, ensuring that the spectacle continues for over a month. Red is the most common flower color, often paler on the inside, but some plants have salmon or pinkish-red flowers, and exceptional plants may have yellow-orange or cream-yellow flowers. The color of the inside of the flower ranges from slightly paler than the outside all the way to white. Each flower is about two to four inches (5 – 10 cm) across. 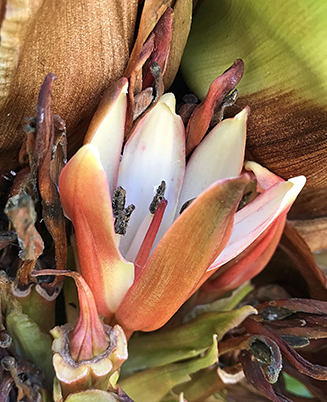 The fleshy seed capsules of Doryanthes palmeri are oval and average about 3 to 3½ inches long (8-9 cm). Eventually they dry and split open to release the flat brown winged seeds.

Doryanthes palmeri is drought-tolerant and easy to grow, though its large size means that ample space must be allotted for it. With its dramatic rosette of long sword-like leaves, it works well as a bold garden focal-point. It flowers best in a sunny position, and can take winter lows down to at least 25° F (-4° C).