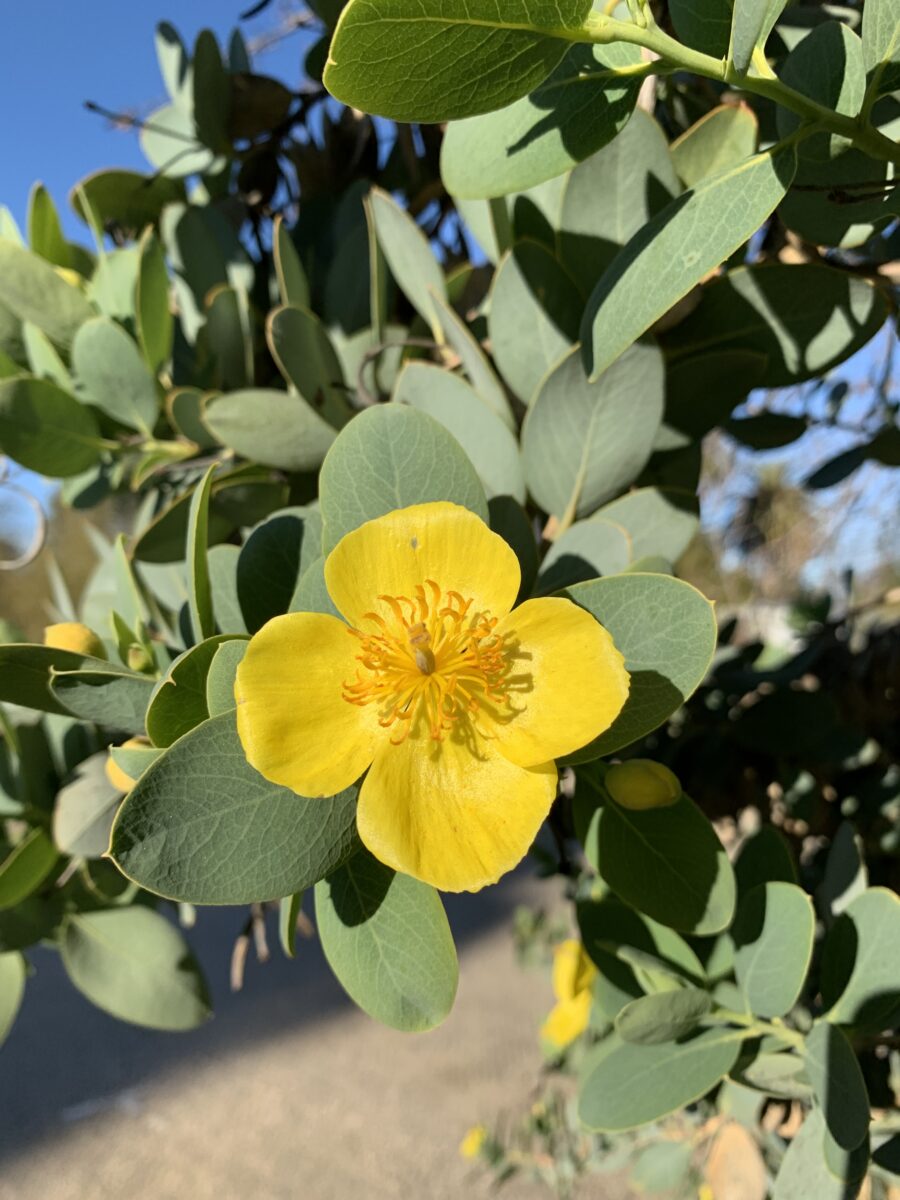 Plants in the Papaveraceae, or Poppy Family, are often herbaceous annuals, as is the case with California’s state flower, Eschscholzia californica. At the other end of the size spectrum is Dendromecon harfordii, commonly known as the Channel Island Bush Poppy. This species is native to the Channel Islands off the coast of southern California, and it is commonly a shrub with a height of 7 to 10 feet (2 to 3 m), though large plants may reach 15 ft. (4.6 m) or more.

Dendromecon harfordii shares its genus with Dendromecon rigida, which has a wide occurrence in California’s Coast Ranges from Lake County and southern Mendocino County all the way down to Baja California (it also occurs in the western foothills of the Sierra Nevada, though it is less common there). D. rigida is a smaller plant with narrower leaves and smaller flowers, but the two species are similar enough that D. harfordii was formerly classified as D. rigida subspecies harfordii.

Even when it is not in flower, Dendromecon harfordii is notable for its attractive milky-green oval leaves. These are 1¼ to 3 inches long (3.2 to 7.6 cm), with a very short petiole (leaf-stalk) at the base and a small point at the tip.

As is usual in the Papaveraceae, the flowers of D. harfordii are produced singly, not in clusters. They are abundant in late winter, spring, and early summer, but may appear more sporadically through much of the year. The pedicel, or flower stalk, is generally a little shorter than the leaves, in contrast with D. rigida, which has a longer pedicel. At the bud stage there are two sepals, but these are shed when the flower opens. There are usually four petals, but on rare occasions there may be five or six. The cupped overlapping bright yellow petals are oval to wedge-shaped, with shallow lengthwise grooves and often a bit of waviness at their tips. There are numerous curving yellow-orange stamens around the pistil at the center of the flower. The flower diameter is 2 to 3 inches (5 to 7.6 cm).

After pollination, the petals detach and the pistil elongates into a slender curved cylindrical seed pod, slightly bulging at the middle, which grows to a length of 2¾ to 4 inches (7 to 10 cm). As the pod ripens, it changes color from green to yellow to pale brown as it dries; it then splits open from the base upward and releases the seeds. The oval seeds are about a tenth of an inch long or a little more (2.5 to 3 mm).

Dendromecon harfordii is not a difficult plant to grow in a Mediterranean climate zone such as that of California, as long as it is given good drainage and sun. Some supplemental water helps to get it started as a young plant, but after the first few years it needs very little water even during California’s long dry summers. It can tolerate winter lows down to at least 20° F (-7° C). 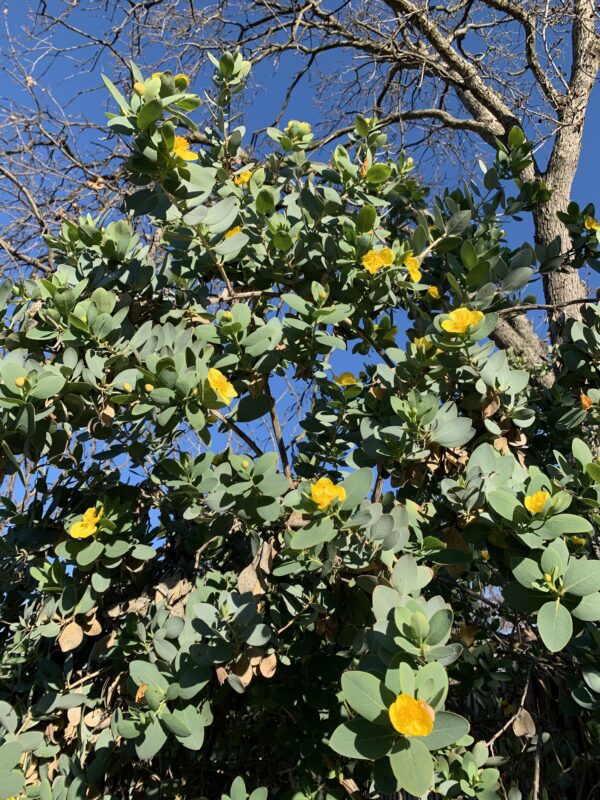 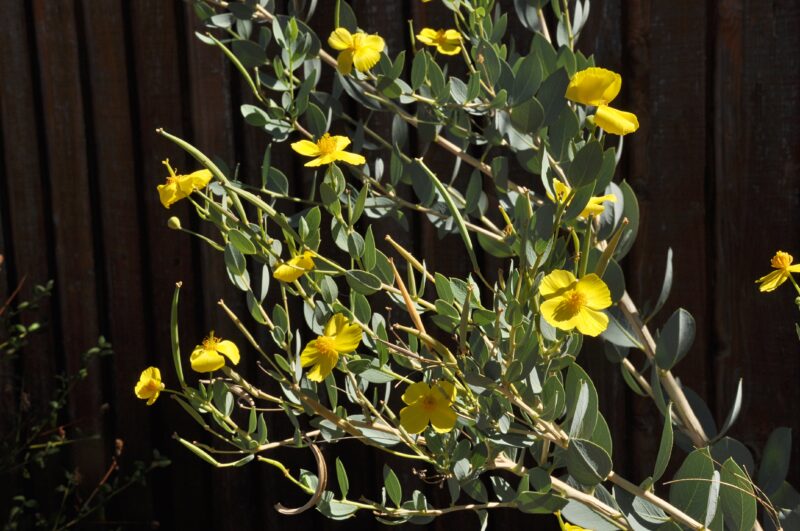 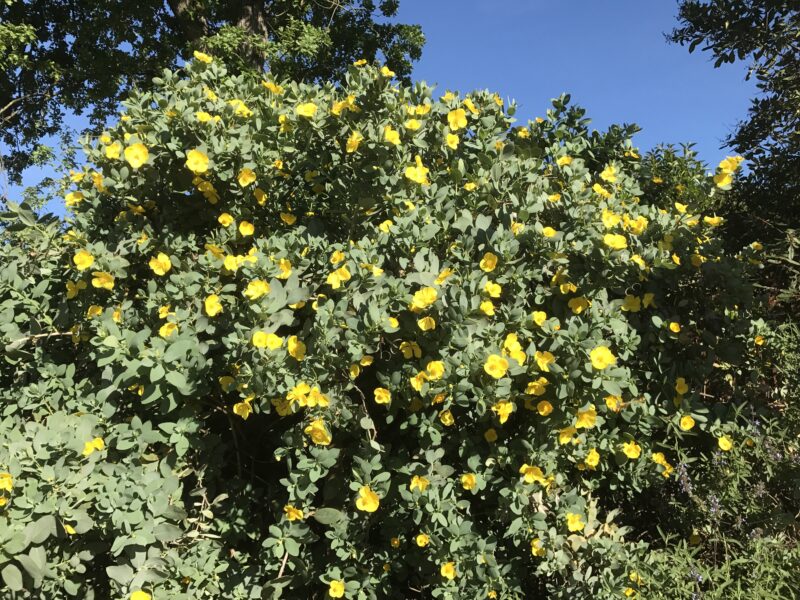