Dasylirion is a genus of 20 or so species native to Mexico and the southwestern US (Wikipedia lists 22 species). In recent classification systems, it is listed as belonging to the subfamily Nolinoideae within the Asparagus Family (Asparagaceae), but family groupings among the monocots have gone through multiple rearrangements. In any case, Dasylirion is clearly related to Nolina, Beaucarnea and Calibanus, and all four of these genera have some features in common: they all come from North America to Central America, are dioecious (having separate male and female plants), have long narrow leaves, and have round seeds which are either tan or brown. In the case of Dasylirion specifically, plants generally form a large head of radiating strap-like leaves with serrated edges. They may eventually form a trunk, but this takes many years. There are two species which differ from the others in having very narrow needle-like leaves, and these are frequently confused in nurseries and in gardens. These are Dasylirion longissimum and Dasylirion quadrangulatum, and it might be useful to point out their differences.

Despite these floral differences, the two species look vegetatively alike, and this is no doubt the reason they are sometimes listed as synonyms. In gardens, D. longissimum is more frequently encountered.

The leaves of Dasylirion longissimum look like giant needles, with a length of up to 6½ feet (2 m), but they are actually square (or at least 4-sided) in cross-section. They are stiff enough to radiate out in all directions, rather than drooping, but still have enough flexibility to dance and quiver when stirred by the wind, and this is one of their delightful features in garden settings.

Although a plant of D. longissimum remains trunkless (or nearly so) for many years, eventually it does grow taller. Our tallest plant at the Ruth Bancroft Garden has developed a trunk of a little less than 5 feet (1.5 m), but this is only after more than 45 years in the ground.

Any given mature plant of D. longissimum does not flower every year, but on years when this occurs a stalk emerges to one side of the growing tip in summer (typically in July at the Ruth Bancroft Garden), and it rises up well above the tips of the leaves. There are large papery bracts on the stalk, and emerging from between these on the upper part of the stalk are small finger-like clusters of tiny flowers. These are very attractive to bees, which visit the male flowers to gather pollen, and also the female flowers for nectar. The male flower stalk is cream-colored, gradually drying to tan as the flowers go by, but the female stalk is more colorful and remains so for months.

As the flowers are pollinated, many small capsules form, and these develop a dark rust-red color. The capsules are thin-walled and have 3 wing-like projections. Each one has a single seed within, tan in color and about the size of a peppercorn. 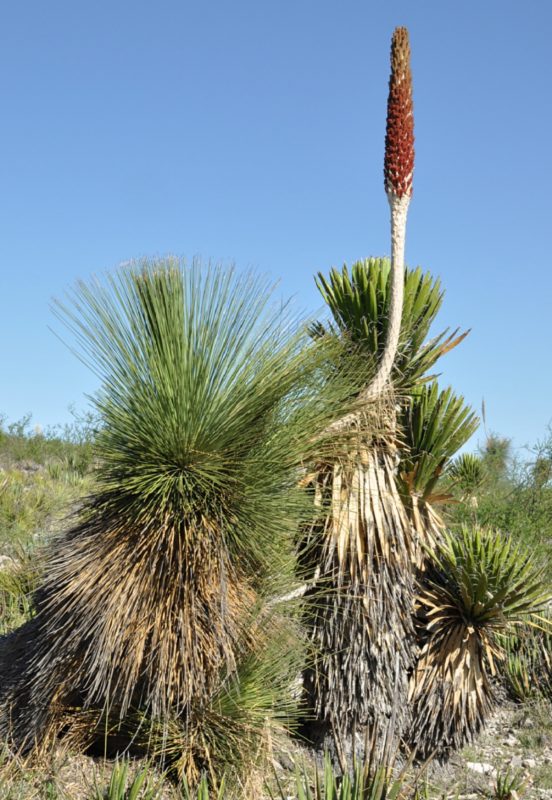