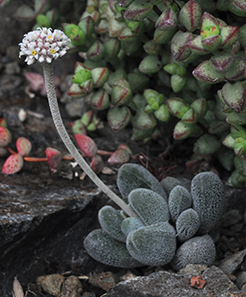 South Africa is native to many members of the Stonecrop Family (Crassulaceae), including plants in genera such as Cotyledon, Tylecodon, Adromischus and Kalanchoe. However, the group with by far the greatest number of species is Crassula itself, the genus after which the family takes its name. A familiar example is Crassula ovata, the jade tree, though it is far from typical because of its large size. Most of the other species tend toward the miniature, and they display an astonishing array of forms, colors and textures. When it comes to texture, one of the most remarkable is Crassula tecta, from South Africa’s Little Karoo region. 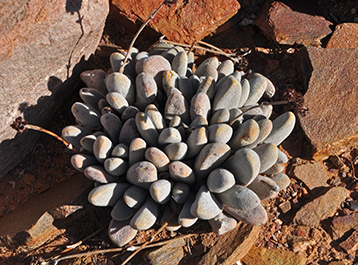 ing species, with tightly-packed chubby oval leaves up to an inch long. The leaves have a hint of a rim and a keel down the backside of the leaf, though sometimes this can be almost imperceptible. Although the base color of the leaf is dark green, the surfaces are so encrusted with tiny rough-textured white bumps that the whole plant looks frosted.

The flower stalks emerge in fall, rising up to a 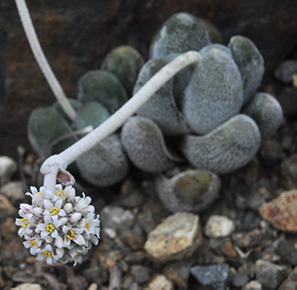 height of a few inches and topped by round clusters of tiny white flowers. Each flower cluster is only about a half-inch or so across (1.3 to 1.4 cm), and the flowers themselves are cup-like with curled-back tips. The flowers are fairly long-lasting and add a nice decorative touch in the fall and early winter months.

At the Ruth Bancroft Garden, Crassula tecta is growing in our shade house, where it is protected from winter extremes. We are not sure of its cold-tolerance, though judging from its native habitat it should be able to take at least a light frost.