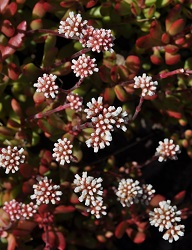 The genus Crassula is the type-genus of the Stonecrop Family (Crassulaceae), meaning that the family is named after it, and it also has more species than any other genus in the family. The great majority of these are found in southern Africa, though some occur farther afield. The Crassulaceae volume of the Illustrated handbook of Succulent Plants (2003) give a total of about 150 species found in South Africa alone, and many of these are popular plants in cultivation. An example is Crassula pubescens subsp. radicans, which is native to the southwestern part of the Eastern Cape Province. Before being classified as a subspecies of C. pubescens, this plant was called simply Crassula radicans, and many nurseries continue to use this shorter name. 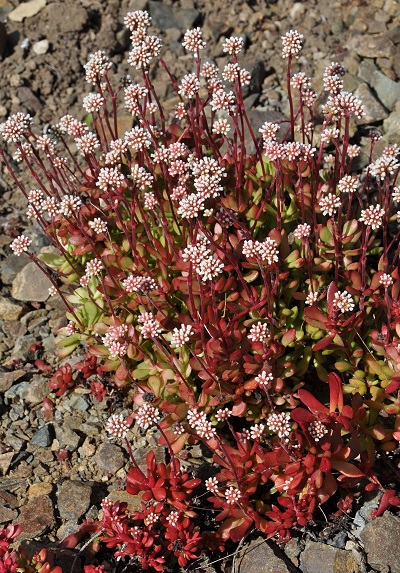 Crassula pubescens subsp. radicans is a small mat-forming plant which is usually not more than a few inches tall. It has many slender stems which are initially upright, but in time they spread out laterally and root as they go, with new shoots emerging from the nodes. The leaves are spoon-shaped, succulent, and about .4 inch to one inch long. In the shade they are green, but in an exposed position they become flushed with red. Sometimes just the edges are reddened, but often the whole plant turns beet-red. Because of its small size and spreading habit, Crassula pubescens subsp. radicans is well-suited for use as a small-scale ground cover, or for filling in between larger plants in a dish garden or planter. 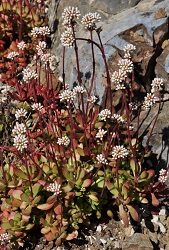 In California, the main blooming period for C. pubescens subsp. radicans is March and April, although the flowering may continue into early May. In the plant’s Southern Hemisphere home, this would occur at the opposite time of year. The slender flower stalks rise erectly well above the leaves, with minute bracts at intervals along their length. At the top is a cluster of tiny white flowers whose 5 petals jut upward rather than spreading, each one looking like a miniature white crown. The contrast between the reddened leaves and the snow-white flowers is very attractive.