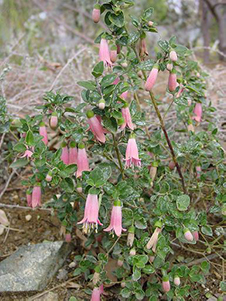 Correa is a genus of Australian shrubs valued for their delightful bell-like flowers in winter.  They are sometimes referred to as “Australian fuchsias”, but this is only because their downward-pointing flowers look vaguely fuchsia-like, and the two belong to entirely different plant families.  Though one might not guess it, Correa is in the Rutaceae, best known for the citrus fruits.

Of the species in Correa, Correa pulchella is the most commonly grown species in northern California.  It has color 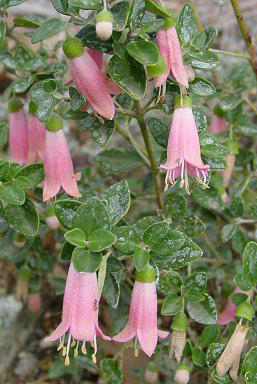 forms varying from orange to red to various shades of pink, and numerous cultivars have made their way into the nursery trade.  One of these is Correa ‘Pink Eyre’, a compact two- to three-foot shrub with small deep green leaves and an abundance of inch-long tubular pink flowers, flaring slightly at the tips.  The flowers are slightly fuzzy on the outside.

Correa pulchella is native to South Australia, and it does well in climates like ours with dry summers, needing only a modest amount of watering and little fertilizing.  It is happy in poor or rocky soils, as long as it has good drainage.  This attractive little shrub benefits from partial shade in hotter inland locations.