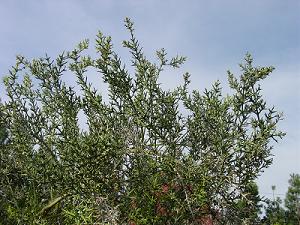 One of the botanical oddities at the Ruth Bancroft Garden is the “anchor plant”, Colletia cruciata.  The “anchors” referred to in its common name are stiff triangular flanges which jut out from the stems in opposite pairs, each pair held at right angles to the pair below.  These flanges are actually modified stems, and each ends in a sharp spine.  C. cruciata is a well-branched shrub, and grows up to 10 feet tall.  It lacks leaves and carries out photosynthesis in the stems, so the whole plant, including the “anchors”, is a deep green color. 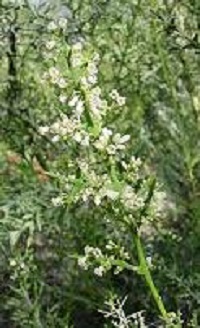 The blooming time for Colletia cruciata is in the fall, and our plant at the Ruth Bancroft Garden bears a profusion of small white flowers in October and November.  These lack true petals, but the sepals are petal-like and attractive.  They are fused into a tube at the base, and separate into lobes which curl back at the tips.   The flowers have a sweet smell, though this is not pronounced.

The genus Colletia consists of spiny shrubs belonging to the family Rhamnaceae.  In California, this family is notable for the many species of Ceanothus, often called “California lilac”, and also for the coffeeberry, Rhamnus californica.  All members of Colletia, however, are native to the southern portion of South America, below the tropical zone along the equator.   C. cruciata occurs in Uruguay and southern Brazil.  It is reputed to tolerate temperatures as low as 10° F.