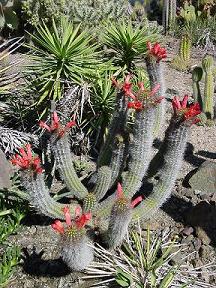 South America has many kinds of clump-forming cacti with slender columnar stems, growing upright initially, but often tending to sprawl as they elongate.  As with so many groups of cacti, these have gone through multiple name changes as different authors have come up with differing taxonomic treatments.  In recent years many of them have been included in the genus Cleistocactus.  One of these is a plant named Cleistocactus sepium from the Andes mountain range in Ecuador.

Cleistocactus sepium is a variable species, and different forms of it were given separate names under the 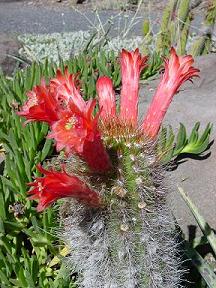 genus Borzicactus in the classification system of Curt Backeberg.  At the Ruth Bancroft Garden we have a form, received under the name Borzicactus websterianus, which is quite floriferous.  It is a little over 2 feet (60 cm) tall, with a stem diameter of 3 inches (75 cm).  Like other forms of Cleistocactus sepium, this plant has stems which normally do not branch, but over time new ones arise from the base to form a clump.

Cleistocactus sepium has red tubular flowers which flare out at the mouth, making a brilliant display.  They jut out from the sides of the stems below the apex, coming in flushes during the summer and fall months.  Flower length for the species is given as 5-8 cm (about 2-3 inches); our plant  at RBG has flowers about 2½ inches long.  The round fruits start out green, yellowing as they mature.