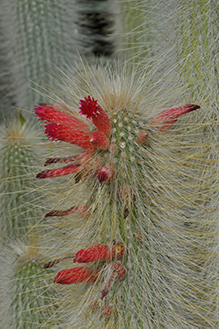 Cleistocactus is a genus of cylindrical-stemmed branching cacti from South America, mostly native to the eastern slopes of the Andes in northwestern Argentina, Bolivia and Peru. They have tubular flowers, often in shades of red or red-orange, which are well-adapted to pollination by hummingbirds. Many species have slender stems which start out upright and then bend to the side as they elongate, but some have stems stout enough that they remain upright. One of these is Cleistocactus hyalacanthus, which is native to Jujuy and Salta Provinces i 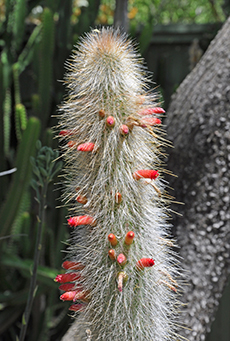 n the far north of Argentina, as well as across the border in southern Bolivia.

Cleistocactus hyalacanthus branches at the base to form a cluster of stems densely clad in yellowish-white needle-like spines. A mature plant is typically about 3 to 4 feet tall (.9 to 1.2 m), though sometimes plants may grow to be a little taller.

Cleistocactus hyalacanthus begins flowering in spring at the Ruth Bancroft Garden, generally in late March or early April, and continues on into the summer. The flowers extend horizontally from the sides of the stems, and they are about an inch and a half long (3.5-4 cm). The sides of the flowers are on the orange side of red, with the tips a little darker and more purplish. If the flowers are fertilized, the base swells into a small round fruit about .4 inches in diameter (1 cm), with the remains of the dried flower 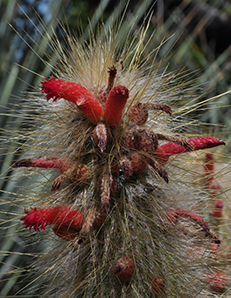 attached. Though hummingbirds do not eat the fruits, other birds do, and the seeds sprout after passing through the bird’s digestive tract.

Cleistocactus hyalacanthus is similar in appearance to another erect-growing species named C. strausii, which comes from the same general area, but this is a taller-growing species with whiter spines and longer flowers which have a more purplish-red coloration. Both species make excellent garden subjects if given good drainage.