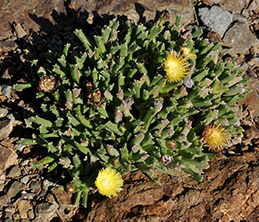 Cheiridopsis is a genus of highly succulent plants in the Ice Plant Family (Aizoaceae), native to southern Africa’s winter rainfall region in northwestern South Africa and southwestern Namibia. Most flower between autumn and early spring. There are about 25 to 35 species, depending on whose species concepts are followed, but this is a considerable reduction from the approximately 100 species recognized when narrower species delimitation was in vogue. The leaves range from finger-like to shorter and fatter, like those of a Gibbaeum or an 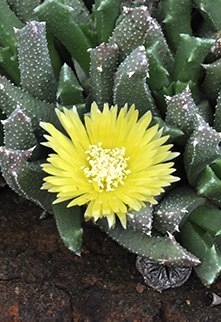 Argyroderma (these are other genera in the Aizoaceae). The majority of the species have yellow flowers, though a few have violet-purple or orange hues.

Cheiridopsis umdausensis is unique in the genus for the little white “goose bumps” on its leaves, which may also sometimes have a few tiny teeth toward the tip. It comes from Namaqualand in South Africa’s Northern Cape Province. In time it makes a tight clump of many heads, and its light yellow flowers come out in late fall to winter. The flowers normally open in the middle of the day and close at dusk. Though it takes temperatures down to freezing without difficulty, it should be protected from cold snaps which go much below this.