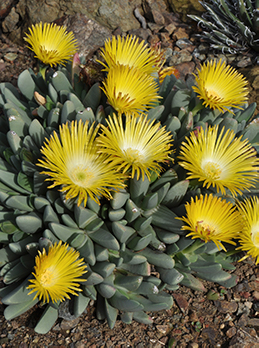 The genus Cheiridopsis contains about 25 species from the winter-rainfall area along the west coast of South Africa and into southwestern Namibia. They are clump-forming leaf-succulents belonging to the Aizoaceae, or Ice Plant Family, with their leaves ranging from rounded to beak-like to finger-like. Their showy flowers come mainly in the winter months, with yellow being the most common color. Cheiridopsis robusta has a more extensive distribution than other species in the genus, and is found both in Namaqualand (a dry region in northwestern South Africa) and across the border in the southwest corner of Namibia. Its gray-green beak-like leaves are borne in pairs, each one having a flat face and a back side which is hump-backed and keeled toward the tip. When the pair first emerges, the two faces are tightly pressed together, but over time they separate, and the next year’s pair pushes out from between them. 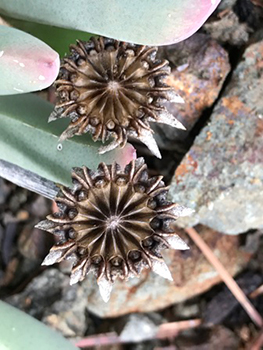 Like most species of Cheiridopsis, C. robusta is winter-flowering, and at the Ruth Bancroft Garden it usually begins in November or December, ending in late January to March.The showy flowers are held on short stalks, and have a diameter of 1⅔ to 2¼ inches (42-58 mm).Although yellow is the usual color for the species, there are populations with cream flowers as well, and occasionally the flowers may be coppery-tinged or purple-tinged. The flowers open in the middle of the day and close again at the end of the day. 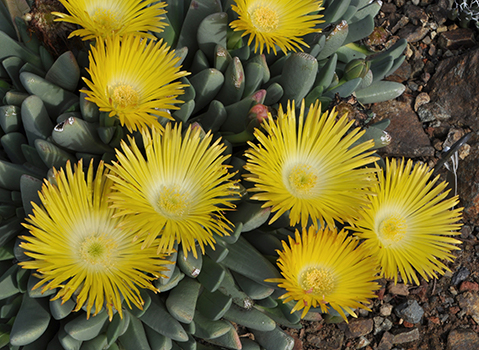 In its native habitat, Cheiridopsis robusta gets 4 inches or less of annual rainfall. However, if given full sun and excellent drainage, it can be grown in our less arid conditions. It can endure winter cold down to at least 27°F (nearly -3°C), but should be protected in the event of extended spells below freezing.