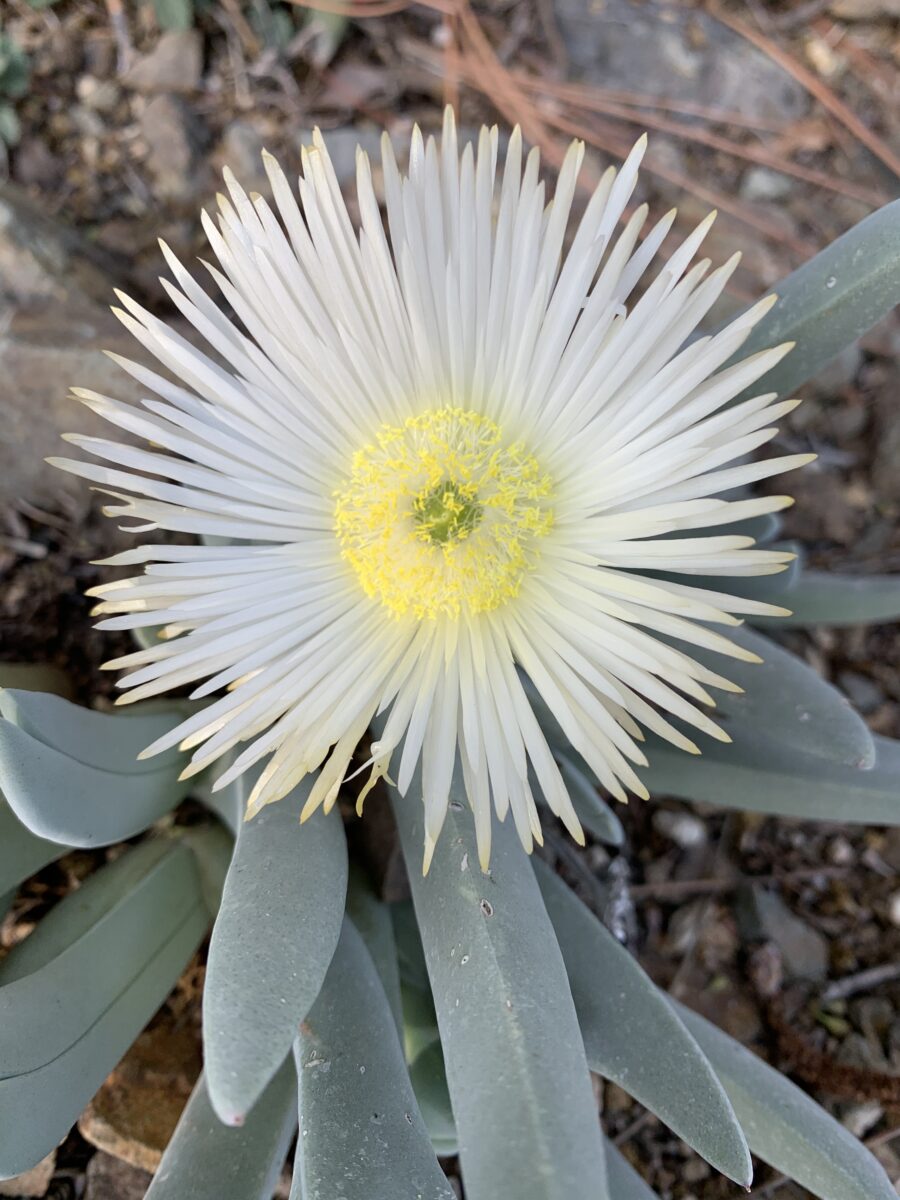 A sizeable majority of the species in the Aizoaceae (Ice Plant Family) come from southern Africa, and some of the family’s genera are concentrated in the winter-rainfall area, on the west side of South Africa and the southwest corner of neighboring Namibia. One such genus is Cheiridopsis, with 30 species recognized in Heidrun Hartmann’s monograph on the family, published in 2001. The various species occur in a band extending from a little north of Cape Town up through the arid Namaqualand region and across the Orange River into southwestern Namibia. One of the species found in Namaqualand is Cheiridopsis denticulata, which is abundant in the area around the town of Steinkopf.

While some species in Cheiridopsis have short, puffy leaves, others have longer, finger-like leaves, as is the case with Cheiridopsis denticulata, which has some of the longest leaves to be found in the genus. They are a very pale milky-blue or blue-green color, with a length of up to 4 inches (10 cm) and a width of just under a half-inch (12 mm). Some plants have a widening of the leaf just below the tip, with small teeth along a keel at this wider part, but other plants lack this. Even though this trait is not always present, it is the source of the plant’s name, since denticulata means “having small teeth”. The leaves have tiny dark green spots, and although they appear smooth, they are minutely bumpy.

Like most of the species in its genus, Cheiridopsis denticulata comes into flower in the winter, with most of the flowers appearing after the winter solstice. The flowers are quite large, more so than other Cheiridopsis species, with a diameter often over 3 inches (8 cm), and occasionally as much as 4 inches (10.2 cm). They have pedicels a little longer than the leaves, and they spread out like parasols above the plant. The flower color is variable, ranging from white to yellow to orange to various pastel shades of creamy orange or pale ochre. Occasionally, plants may have flowers with a purplish or pinkish tinge. White-flowered plants were originally described as Cheiridopsis candidissima, but this is now regarded as a synonym of C. denticulata.

Pollinated flowers yield capsules with a diameter of a half-inch or more (13mm). Typically, the fruits have 17 to 19 chambers, or locules, each containing pear-shaped whitish to brownish seeds. The seeds are on average about 1/30 inch long, or 8.5 mm. As with many plants in the Aizoaceae, the dry capsules swell and open up when conditions are moist, allowing seeds to be washed out by the rain. The capsules then close again when things dry out. 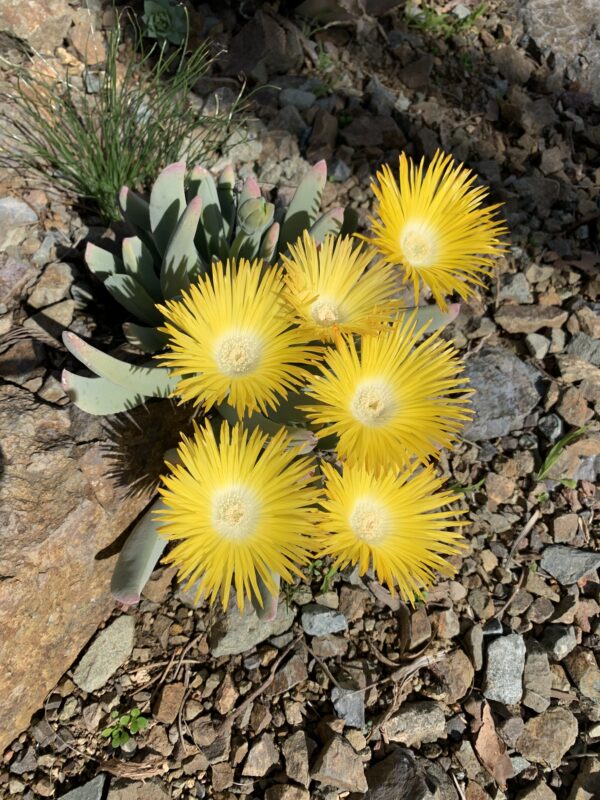 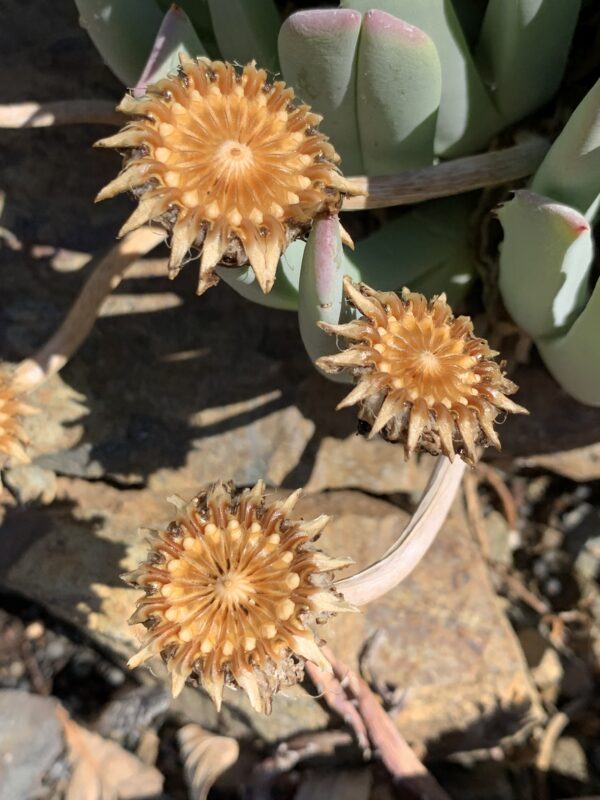 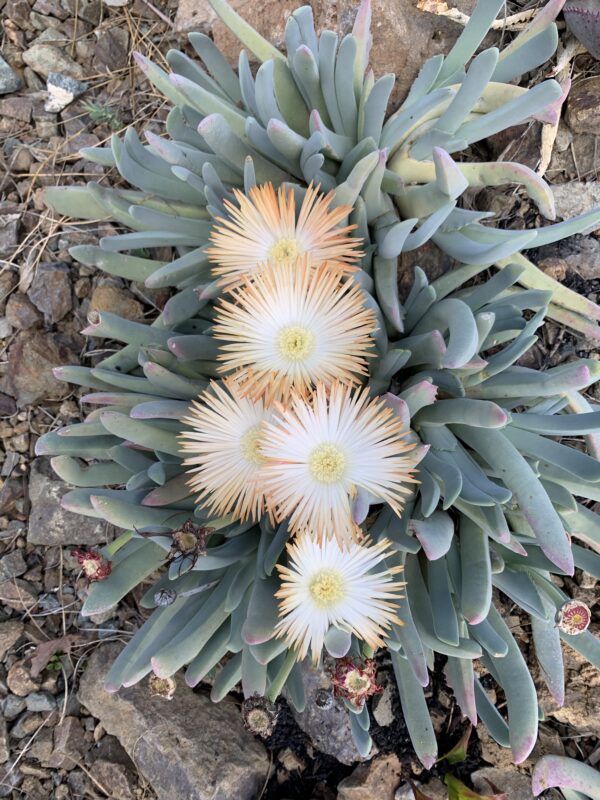