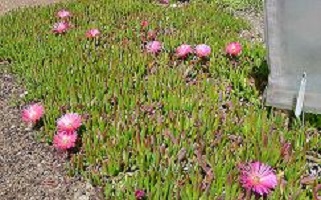 Cephalophyllum is a genus in the ice plant family (Aizoaceae, or Mesembryanthemaceae in the old classification system).  Plants in the genus have finger-like leaves, with some kinds growing in a compact tuft and others spreading more widely and forming a mat.  They have attractive vividly-colored flowers, and most are winter growers.  They are native to the western part of South Africa and northward into southern Namibia. 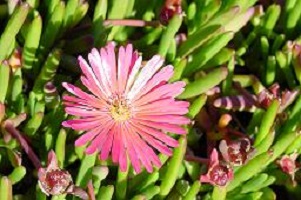 Africa, northeast of Cape Town.  It is smaller than Carpobrotus, the familiar ice plant seen along the coast of California, and it makes a neater and denser ground cover, not spreading so rampantly.  While Carpobrotus can re-seed in coastal areas and become invasive, this is not a problem with Cephalophyllum stayneri.

Cephalophyllum stayneri flowers during the winter months, like most other members of its genus.  It has deep pink flowers tinged with orange, borne on stalks about 2 inches long (5 cm), held above the prostrate creeping stems.  Its leaves are up to 2¾ inches long (7 cm) and green in color, tinged reddish or purplish-red if given a sunny growing position.  The stems are often quite red.  This species can take winter lows of at least 26° Fahrenheit (-3° C) without injury.