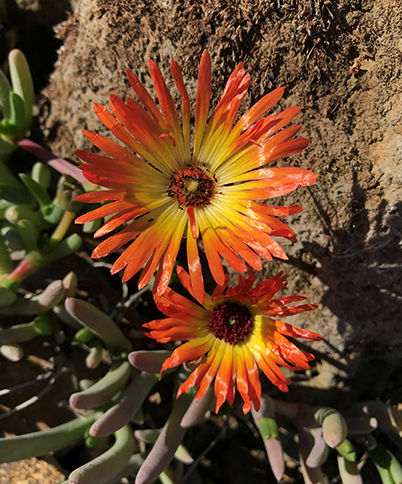 Cephalophyllum is a genus of cylindrical-leaved plants belonging to the Ice Plant Family (Aizoaceae). Sometimes members of this family are referred to as “mesembs”, which is a shortened version of the old family name, Mesembryanthemaceae. This is a large family of succulents, taking up two volumes of the six-volume Illustrated Handbook of Succulent Plants. This work, published in 2001, lists 32 species in Cephalophyllum, in keeping with recent trends toward broader species concepts. An older reference, Hermann Jacobsen’s Handbook of Succulent Plants, lists 67 species. As a group, the genus Cephalophyllum is found in the western parts of South Africa and northward into southwestern Namibia, in the area where winter rainfall predominates. A few species have ranges farther to the east, where rainfall is less confined to the winter months, but these are the exception. 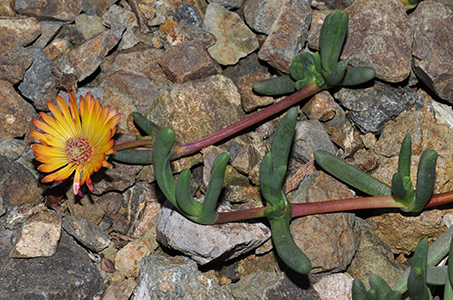 Some kinds of Cephalophyllum form a tuft of leaves, while others have a trailing habit, with their stems spreading horizontally and displaying visible internodes between the points where the leaves emerge. Cephalophyllum aureorubrum is one of the latter type, and its creeping stems may reach a length of a foot or more (30 cm). 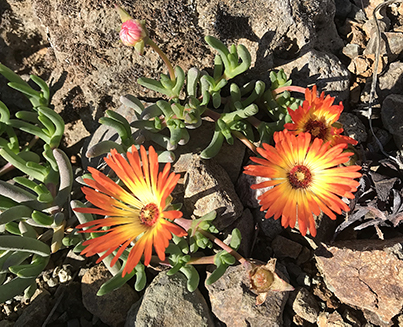 The green cylindrical leaves of Cephalophyllum aureorubrum are up to 2⅜ inches long (6 cm) and held upright. Like most species in the genus, C. aureorubrum is winter-flowering, and our plants at the Ruth Bancroft Garden (in the Northern Hemisphere) generally begin flowering in late November and finish in February. The flowers are as much as 2 inches (5 cm) in diameter, with yellow centers and orange to red tips. As with many plants in the Aizoaceae, the flowers close at night and do not re-open until the middle of the following day. 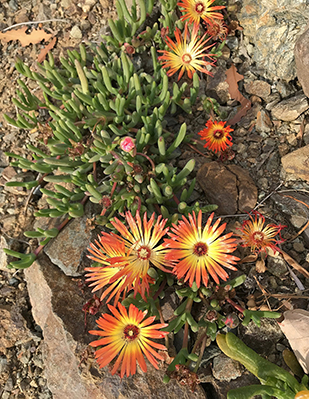 Recent reference works on the Aizoaceae, including the Illustrated Handbook of Succulent Plants, treat C. aureorubrum as a synonym of Cephalophyllum rigidum, which was originally described from plants with all-yellow flowers in the same general area. In the Handbook, Heidrun Hartmann follows this “lumping” trend, but lists the flower color as “yellow or yellow and purple”. Since the flowers of our plant do not match this, we are continuing to use the name Cephalophyllum aureorubrum.

At the Ruth Bancroft Garden, we have found this plant easy to grow if given excellent drainage and a sunny spot. Its bright yellow and orange blossoms are a welcome addition to the garden in winter, and lows in the upper 20’s F (to -3°C) have not harmed it.