Calibanus is a genus of two species native to northeastern Mexico, both with grass-like leaves and a corky swollen base, or caudex. The first species described was Calibanus hookeri, discovered by botanists in the mid-1800’s and given its current name in 1911. It was only in 2003 that a second species, Calibanus glassianus, was described.

The plant family in which the quartet is placed has changed numerous times: first they were put in the Liliaceae, then in the Agavaceae, then given their own family Nolinaceae, then put in the family Ruscaceae, and finally in the APG III classification system they are placed in the subfamily Nolinoideae within the larger family Asparagaceae.

First discovered in the Mexican state of San Luis Potosi, Calibanus hookeri is now also known to occur in adjacent states. It can be difficult to spot in the dry rocky hillsides where it grows, since the large caudex blends in with the boulders nearby, and the tufts of narrow leaves look like grasses.

An older plant may have a caudex of about two feet in diameter (.6 m), but it takes many decades to attain this size. The caudex is woody, with a fissured corky surface and a tan to grayish-brown color. Multiple shoots of leaves emerge from the upper surface, and the grey-green leaves are narrow and tough. They are up to about a foot long (30 cm).

Calibanus hookeri is summer-flowering. The branched inflorescences are shorter than the leaves, and they arch to one side. The tiny off-white flowers, sometimes with a reddish or purplish tinge, are borne in small clusters along the main stalk and the side branches. On male plants, the flowers are often easy to miss because they are lost among the foliage, but once pollinated the female plants develop conspicuous rounded red fruits which are about a quarter of an inch across (7 mm). 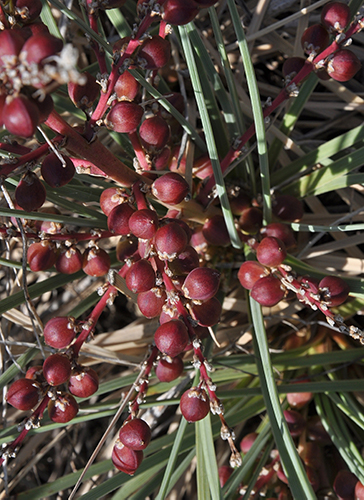 C. hookeri is often grown as a potted plant, admired for the contrast between its swollen base and its grassy foliage.However, it is surprisingly cold-tolerant as well as drought-tolerant, and can be a wonderful addition to a dry garden or rockery. It will endure temperatures down to 20° F (-7° C) or even lower. In the garden, it looks great in an elevated spot where its caudex can be shown off. 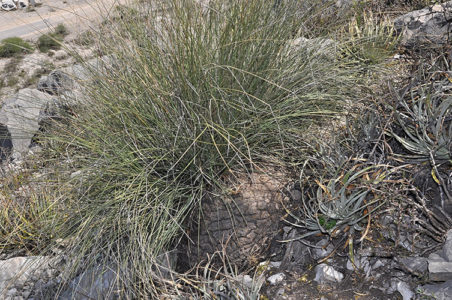