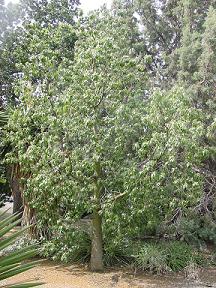 The genus Brachychiton belongs the family Sterculeaceae, and all the species are native to Australia.  The ones in cultivation in California are trees, but there are also some species which grow as shrubs.  Some kinds develop fat trunks, and are sometimes referred to as “bottle trees” or “Australian Bottle Trees”.  One of these is Brachychiton populneus.

Brachychiton populneus has a wide distribution in the eastern part of Australia, occurring in both inland and 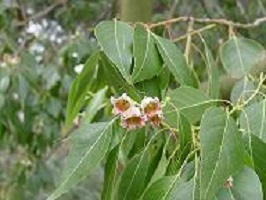 coastal areas.  It is a handsome tree, with glossy leaves resembling those of poplars (the name of the species alludes to this, Populus being the genus of the poplars).  The stout green trunk is one of its points of appeal, though it is not as swollen and bottle-like as that of the related Brachychiton rupestris, which shares its common name of bottle tree.  The crown of Brachychiton populneus is dense, and the foliage is evergreen, making it a popular choice as a shade tree.  Mature trees can reach as much as 40 to 45 feet or more in height, though often they are less than this.   This species does well in mild desert climates such as that of southern Arizona, and it is often used as a street tree there.  Despite the fact that it comes from a part of Australia where the rainfall is concentrated in summer, it grows very well in our winter-rainfall California climate.

The flowers of Brachychiton populneus are not large or showy, but they are attractive when viewed up close.  They lack petals, but the fused sepals look petal-like.  The flowers are bell-shaped and flare into 5 pointed and curled-back tips.  They are pale on the outside, ranging in color from white or greenish-white to cream to pale pink, and within they are attractively speckled with red or purplish-red.  The seeds are contained within dangling follicles which resemble little canoes made of tough leather.