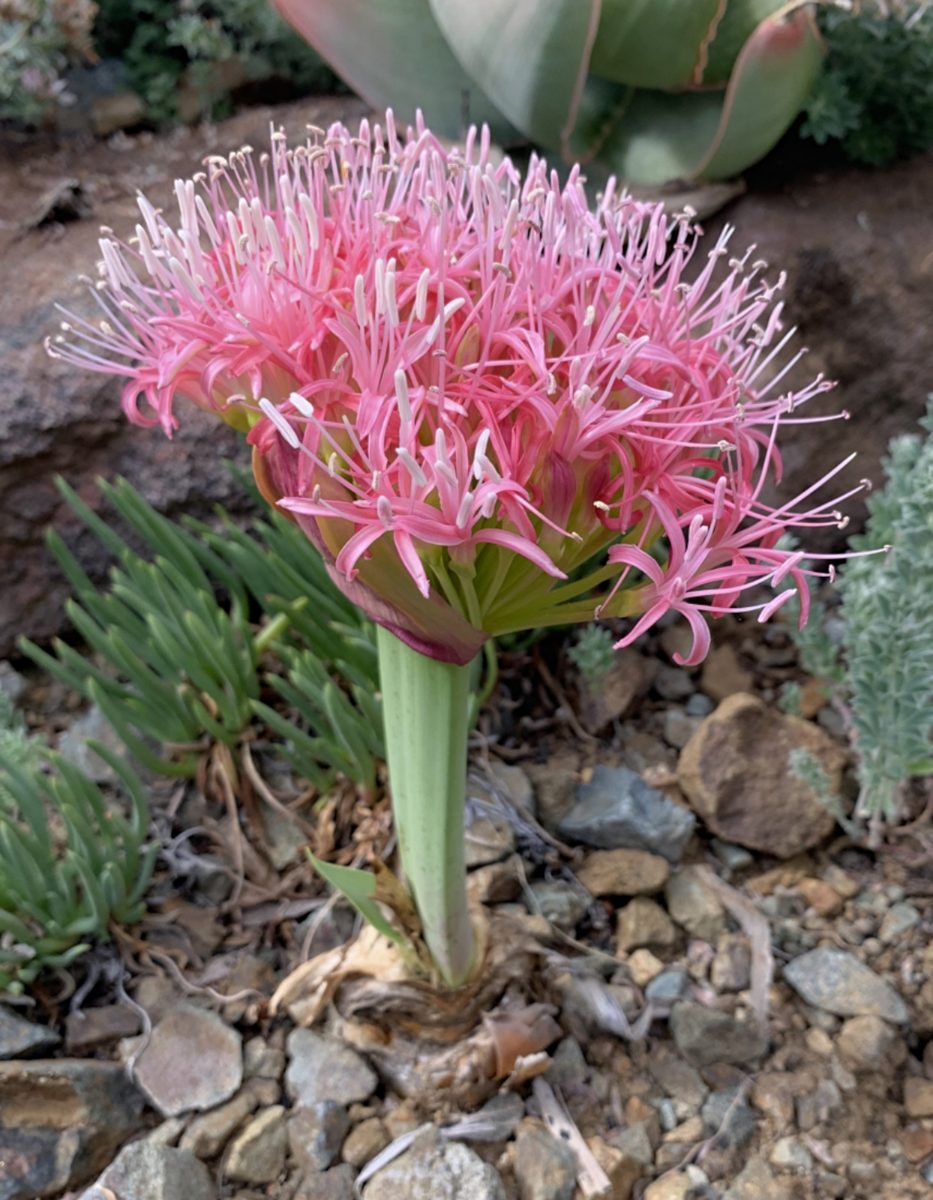 Plants in the Amaryllis Family (Amaryllidaceae) are found around the world, but there are two major centers of diversity with large concentrations of species. The first is in the Americas, from the southern U.S. southward to Chile and Argentina, with 26 genera and about 375 species. The second is southern Africa, with 18 genera and about 250 species. Among the African species are several featured prominently in the plantings at the Ruth Bancroft Garden, and one of these is Boophone disticha.

The distribution of Boophone disticha is extraordinarily broad, with plants occurring in both the winter-rainfall west and the summer-rainfall east, as well as areas such as the south coast which get rainfall year-round. It also grows northward into Namibia, Botswana and up through Zimbabwe into East Africa. With such a large distribution, it is not surprising that the species is quite variable in terms of its season of growth and flowering, and also in its size and the appearance of its leaves.

Our Boophone bulbs at the Ruth Bancroft Garden are mostly underground, but with the upper portion exposed. In nature, plants may be found all the way from completely underground to fully exposed. Bulbs may be as small as 1.6 inches in diameter (4 cm), or as large as 10.6 inches (27 cm), and ours are somewhere in the middle of this range. We do not know the geographic origin of our plants, but we suspect that they may come from along South Africa’s southern coast. This is because they are neither leafless all summer (as winter-rainfall plants are reported to be), nor leafless all winter (as summer-rainfall plants are reported to be). Instead, they are leafless only for a short period in spring, prior to flowering.

The strap-like leaves of Boophone disticha are slightly to deeply channeled, with the margins ranging from highly undulate to only slightly so or not at all. The leaf color is gray-green or bluish-green, and the leaf length may be as short as a little over 4 inches (10.5 cm) or as long as 10½ inches (27 cm), and here again our plants fall somewhere in the middle. All forms of the species have distichous leaves (the trait for which the species was named), and this means that the leaves are arranged in a fan, stacked one on top of the other on either side of the bulb. The fans of wavy leaves are a major point of appeal when the plants are not in flower, and visitors often stop to admire them or inquire about them.

As is typical of plants in the Amaryllidaceae, Boophone disticha has its flowers arranged in an umbel, all radiating out from the top of the flower stalk in the manner of an onion or an agapanthus. The length of the stalk is quite variable, and may be up to a foot tall or a little more (31 cm), but our plants have very short stalks, with the flower clusters close to the ground. The flower color is pink, reddish-pink or purplish-pink, with many tiny flowers packed together in a hemispherical cluster. Flowers at the edges of the cluster typically open first, followed by the ones toward the center, and since the flowers darken as they age, the middle of the cluster can be noticeably lighter. The open flowers have the curled-back petals, with the stamens and pistils jutting outward. If pollinated, the flowers give way to small capsules which are papery and brown at maturity, with round green seeds within.

Boophone disticha bulbs are poisonous, and are sometimes used in Africa to prepare poison arrows, but various parts of the plant are used medicinally as well, and compounds extracted from it have shown promise in use against some forms of cancer. 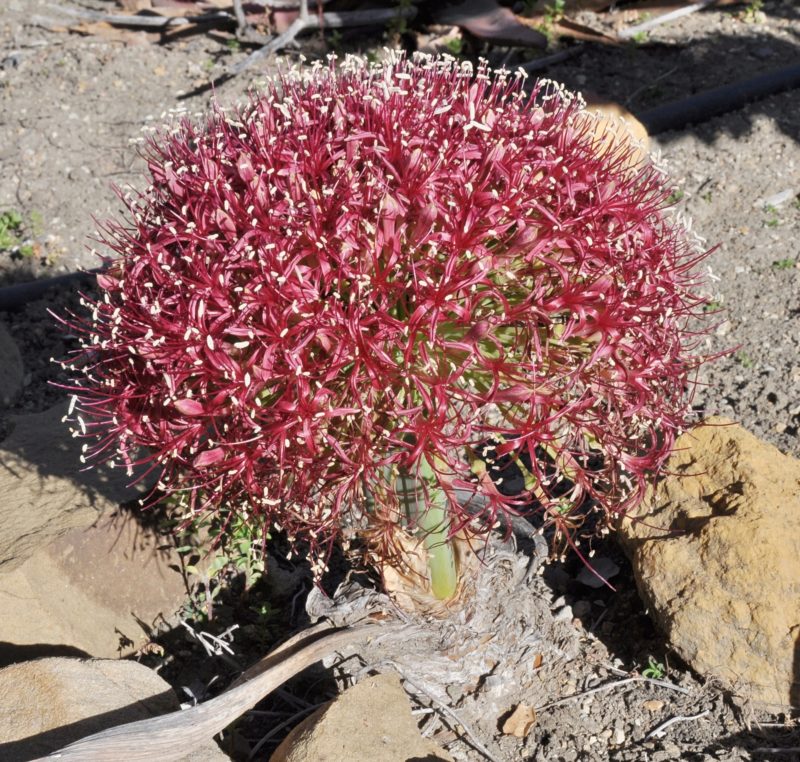 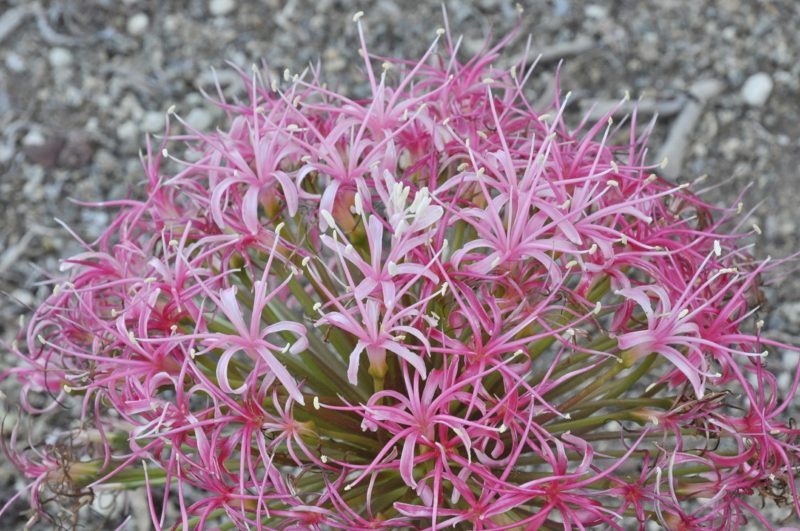 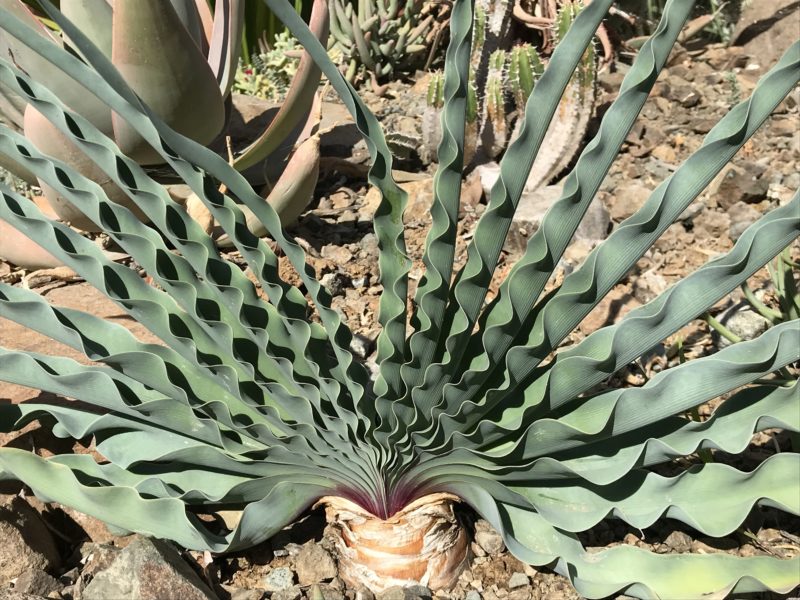 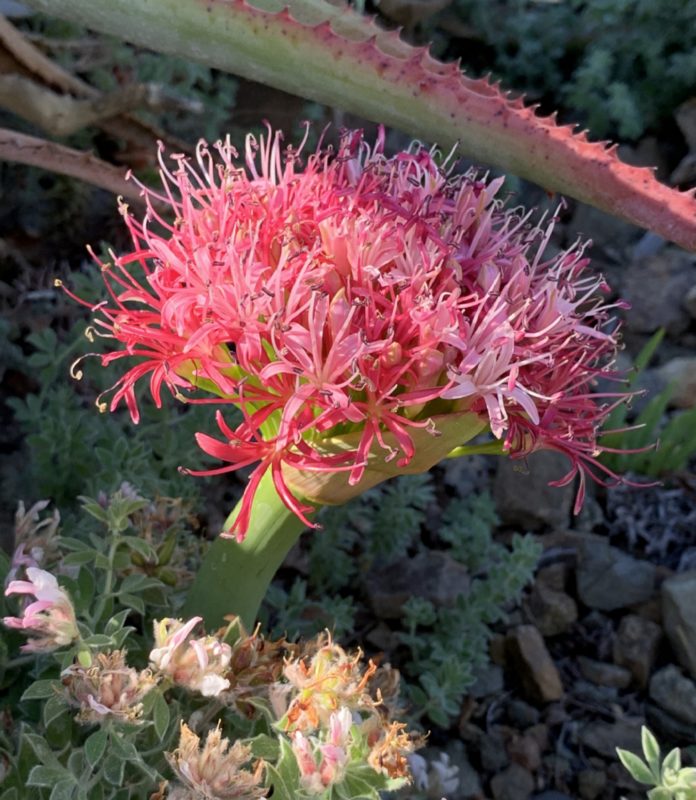