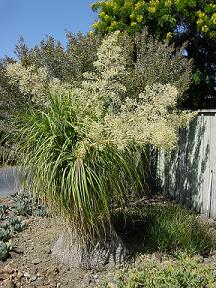 Beaucarnea is a small genus in the Nolinaceae, native to Mexico and southward into Central America.  Like all members of its family, members of this genus have separate male and female plants.  Beaucarnea is very closely related to Nolina, differing in that Beaucarnea has a one-celled ovary, while that of Nolina is three-celled.  Plants in Beaucarnea are distinctive in appearance because they develop a greatly swollen base, which is one of their appealing characteristics.  Some classification systems, however, combine the two genera under Nolina.

By far the best known of the beaucarneas is Beaucarnea recurvata, 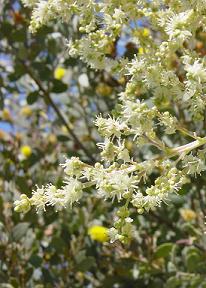 commonly known as the pony-tail palm, though it must be emphasized that it is not a true palm.  It is often used as a house plant, but it can be grown out in the ground in areas with mild winters.  The basal swelling is apparent even in young plants, but a mature plant in the ground can get huge, with the base as big as a large automobile.  Going upward, the base tapers to the comparatively slender stems, topped by long ribbon-like leaves which curve outward and then droop downward, creating the “pony-tail” look alluded to in the common name.  Plants may be multi-trunked, but are more often single-trunked, with the trunks branching to form a multi-headed crown.  The size attained by mature plants varies greatly from one population to another, but in some populations they may grow to be over 30 feet (10 m).

The leaves of the Beaucarnea recurvata can be up to 6 feet long (1.8 m), though they are often less than this, with a width of about ¾ of an inch (2 cm).  The leaf edges have minute serrations and can easily slice into a careless finger, so care should be taken when working around them.

Beaucarnea recurvata plants must be fairly large to flower, so many people who grow them in pots never witness this.  The inflorescence is well-branched, with thousands of tiny white or cream flowers which are very popular with bees.  It is not possible to tell whether a plant is male or female until it flowers, but after flowering the male inflorescence becomes straw-colored, while the female inflorescence takes on a pinkish tinge while the seeds are maturing.  The round seeds are about the size of a peppercorn and are tan in color at maturity.