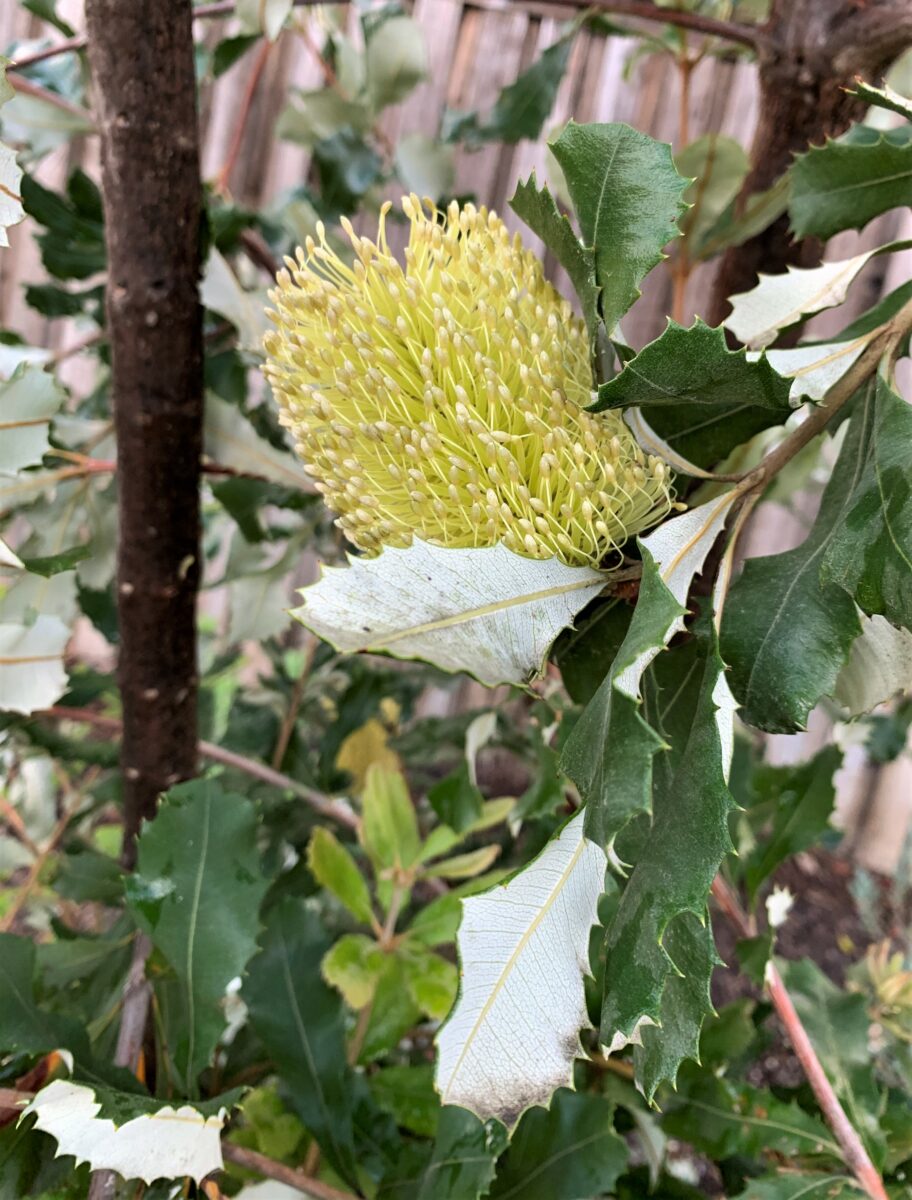 The Protea Family, Proteaceae, has many representatives in Australia, including about 170 species in the large genus Banksia. While all the species in Banksia can be found in the country, there is one whose range extends north to New Guinea, so the genus is nearly endemic, but not exclusively so. The great majority of the plants come from the winter-rainfall region in the southwestern part of Australia, but there are some notable eastern species as well, and one of these is Banksia integrifolia.

While most of the Banksia species have a shrubby habit, a few are trees, as is B. integrifolia. Large specimens can reach a height of up to 82 feet (25 m), though plants in many populations are less lofty, and under some circumstances they may actually grow as shrubs. Trees usually have a single trunk, and this is sometimes gnarly and twisted. The bark is gray and rough-textured, as is often the case in the genus. The species has an extensive distribution along Australia’s east coast, from the state of Victoria in the south to southern Queensland in the north. Because of this, it is often referred to as the coast banksia, but this name is a little misleading, since it can be found in a wide variety of habitats, including in the mountains.

Many species of Banksia have serrated leaves, and this is true of juvenile plants of Banksia integrifolia. However, the leaves of mature plants usually become smooth-edged, and the name integrifolia alludes to this. In Latin, it means “having entire leaves”, and in botanical usage “entire” refers to a leaf whose edges do not have lobes or teeth or serrations. The leaves are very variable in size, ranging from 1.6 to 8 inches long (4 to 20 cm) and from .24 to 1.4 inches wide (.6 to 3.5 cm), but they are notable for the contrast between the dark green upper surface and the silvery-white lower surface. This is especially evident on windy days, when the leaves flex in the breeze, exposing their undersides.

As is the case with many other plants in its family, B. integrifolia has flower clusters consisting of many small flowers with long protruding styles. In the genus Banksia, the clusters are often cylindrical, and this is true for B. integrifolia, with the length ranging from 4 to 5 inches (10 to 12 cm) and the width about 2 inches (5 cm). At the beginning, the cluster has a pale yellow color, and the slender styles extend straight outward, ending in club-like tips. As the flowers age, the color changes to a pale yellow-orange, and at this stage the styles bend upward. The flowering progresses more rapidly than is usual in the genus, but the flower display generally lasts a long time because successive clusters are produced. Autumn is the period of maximum flower production. The flowers produce large amounts of nectar, and they are an important food source for many Australian creatures, including insects, birds, marsupials and bats.

While the flowering is occurring, the woody core of the inflorescence is hidden by the many flowers, but afterward the old flower parts drop away over a period of months. At this point, one can see the unusual construction of the fruiting structure, one of the striking features of the genus.* In B. integrifolia, it has a cob-like appearance, with little nubs where the flowers once were, but what is truly extraordinary is the appearance of the minority of the flowers that have been fertilized. These have enlarged greatly into woody follicles that are initially fuzzy and closed tightly, but eventually they open to release the seeds, at this point resembling clams with gaping mouths. Each follicle holds one or two seeds, which are black and up to .4 inch long (10 mm), with a feathery black wing.

*Note that the fruiting structures are often referred to as “cones”, but this is not botanically correct, since plants in the Protea family are not conifers. 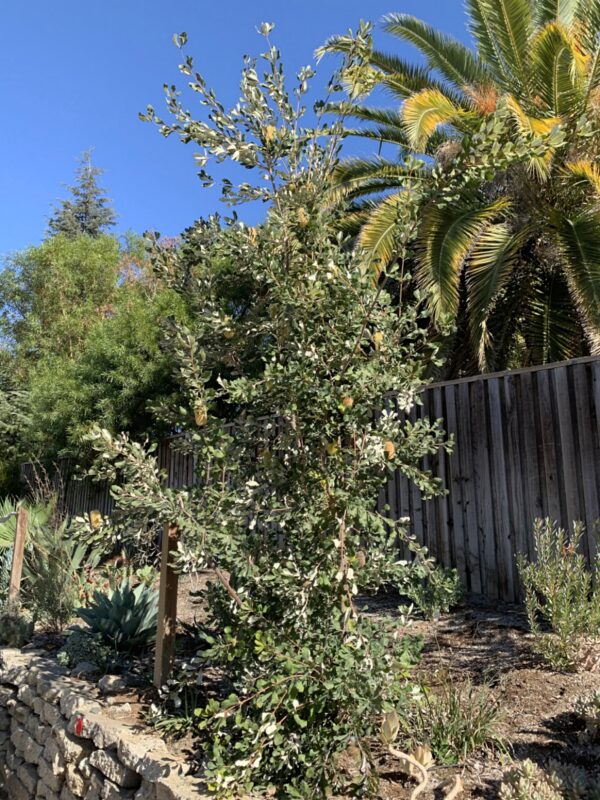 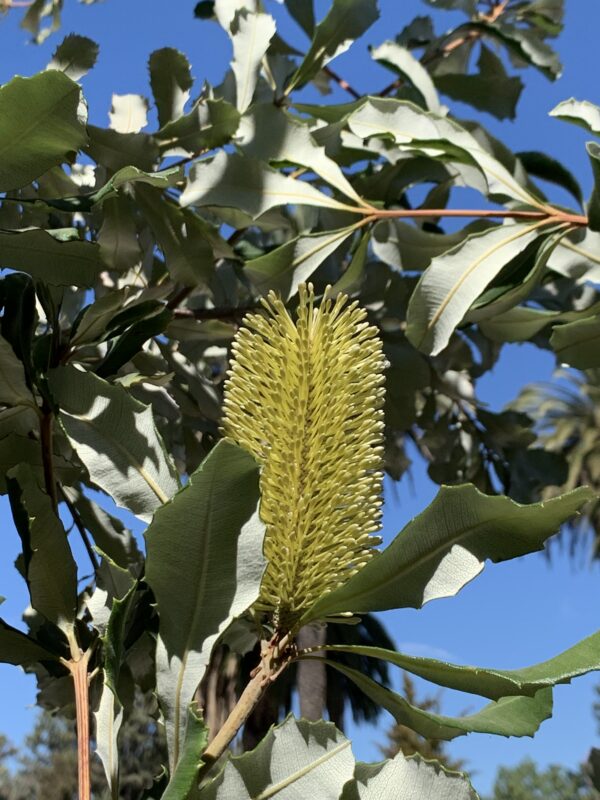 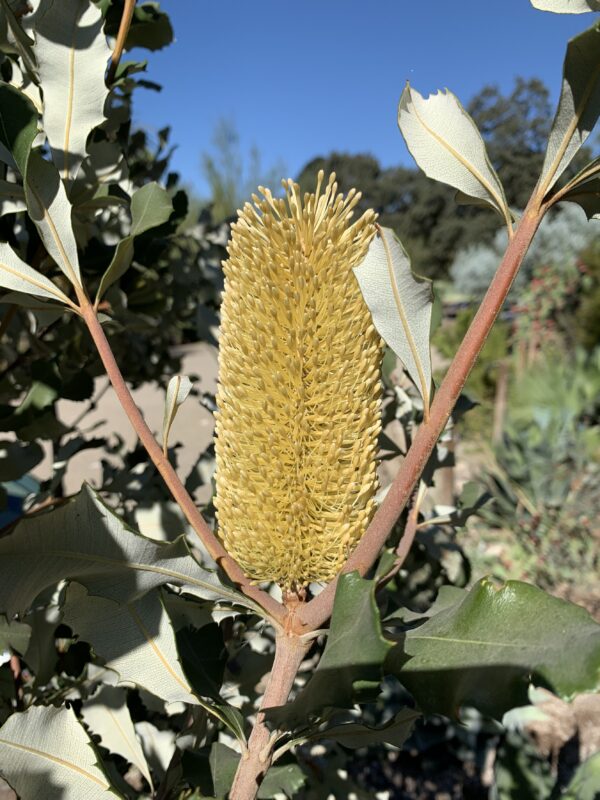 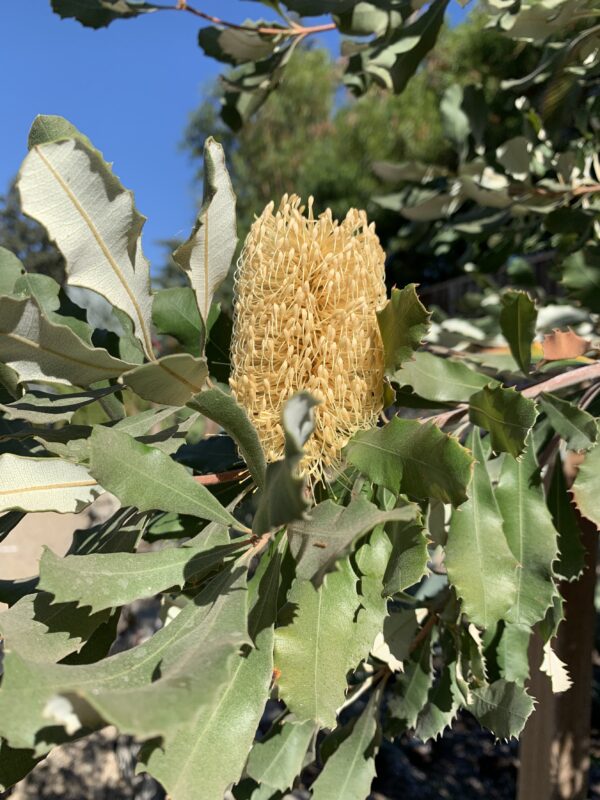 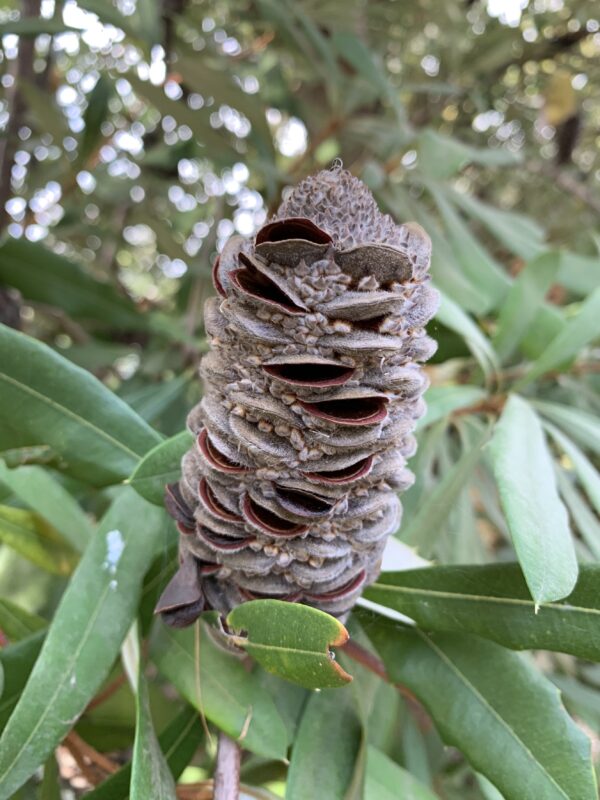