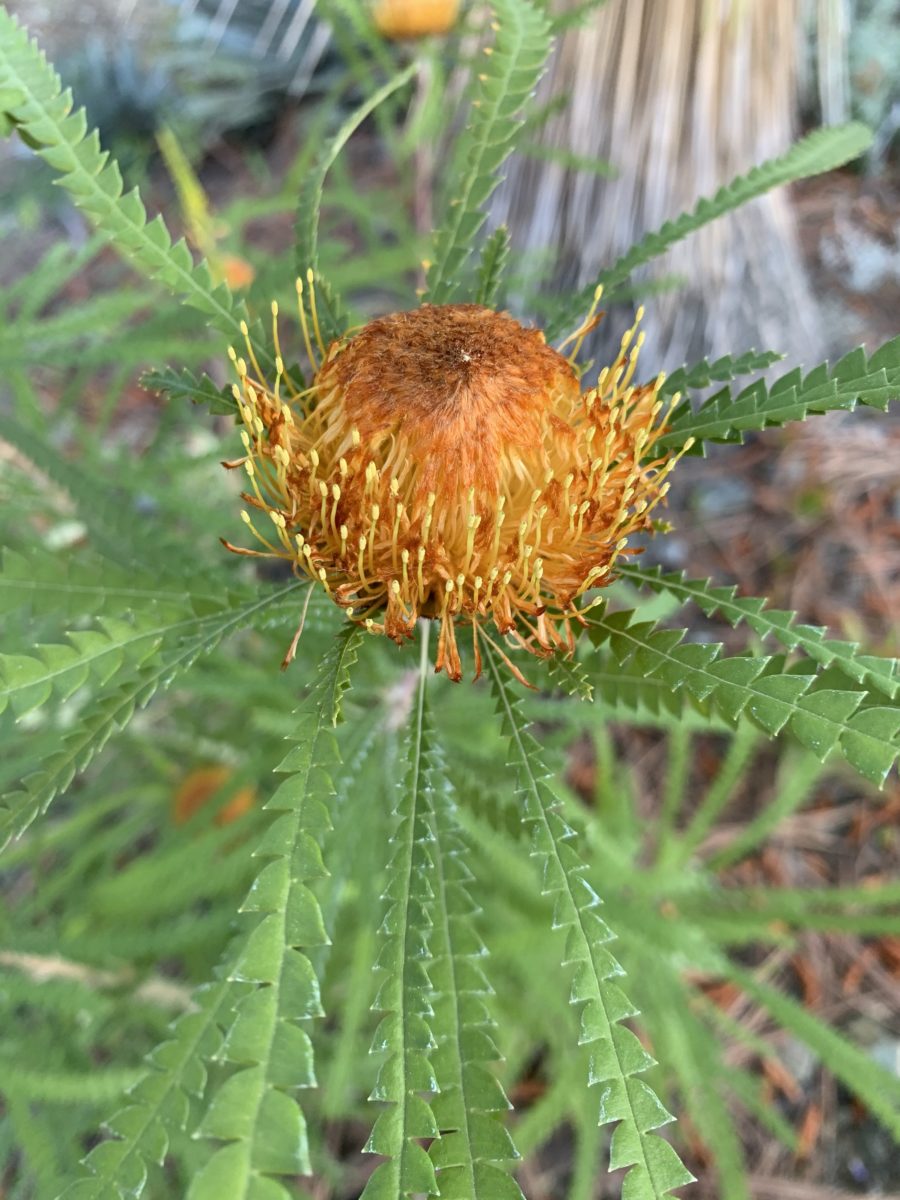 Until recently, Banksia and Dryandra were considered to be two separate groups of Australian plants in the Protea Family (Proteaceae). While the species of Banksia are widely distributed around the continent, those of Dryandra are concentrated in the southwest, the area with a summer-dry Mediterranean climate. The appearance of their flower heads differs in that those of Dryandra are in rounded clusters, while those of Banksia are generally elongated into cylinders. In 2007, a paper was published in which all 93 species in Dryandra were transferred into Banksia (the prior-named genus), greatly expanding that genus beyond the 80 species already included in it. The basis for this was DNA evidence indicating that all the species in Dryandra form a group nested within Banksia, so keeping the former genus would violate the principle that all members of a genus should be more closely related to each other than to members of some other genus. The resulting name changes were in most cases simple: Dryandra formosa becomes Banksia formosa, etc. However, some species-names were already used in both groups, and for these a new name had to be coined. For example, there was a Banksia quercifolia and also a Dryandra quercifolia, so the latter acquired the new name of Banksia heliantha.

The plant named Banksia formosa was originally published as a Dryandra, and its common name of “showy dryandra” reflects this. It comes from the southwest corner of Australia, in the province of Western Australia, and it is a shrub typically 10 feet tall (3 m) or less, though sometimes plants can grow larger than this. The plant’s spread is normally somewhat less than its height. It has narrow leaves to about 7½ inches long (20 cm) with saw-toothed edges, deep green above and white-felted on the undersides.

Banksia formosa has flower clusters about 4 inches in diameter (10 cm), emerging in spring at the stem tips. As with other plats in the genus, there are hundreds of small flowers packed together in the head, and people commonly suppose that the group is one large flower rather than a cluster of them. At the bud stage, all the flowers are pressed together, but as they open they assume more of a pin-cushion look, with the long styles jutting outward. They are very attractive either way, and this is the reason for the name “showy dryandra”. The flower color is yellow, orange or brownish-yellow.
The fruiting structures in Banksia are often called “cones”, though they are not true cones in the botanical sense. They are woody and have follicles embedded in them containing the seeds. In Banksia formosa, the seed structures are small and not prominent, but many relatives have large conspicuous woody “cones”, with the follicles protruding like woody clam shells. In some Banksia species, the follicles spontaneously open to release the seeds, but in other species this happens only in response to fires. Considering the large number of flowers in each flower head, it is remarkable how few actually produce seeds.

Banksia formosa does best in Mediterranean climates which lack summer humidity. It can be grown in varying soils, so long as there is good drainage, and it can handle cold snaps as low as 25° F (-4° C), or perhaps even a little lower. It does well in full sun or partial shade. Many members of the Proteaceae grow in soils with low levels of phosphorus, and can struggle or die if too much is present. B. formosa is not reputed to be especially finicky in this regard, but avoiding fertilizers with significant levels of phosphorus is a good idea. Protea relatives also often grow in acidic to neutral soils, so at the Ruth Bancroft Garden we compensate for our more alkaline conditions by sprinkling granulated sulfur around the plant. B. formosa can be pruned back after flowering to maintain a bushier and more compact form. 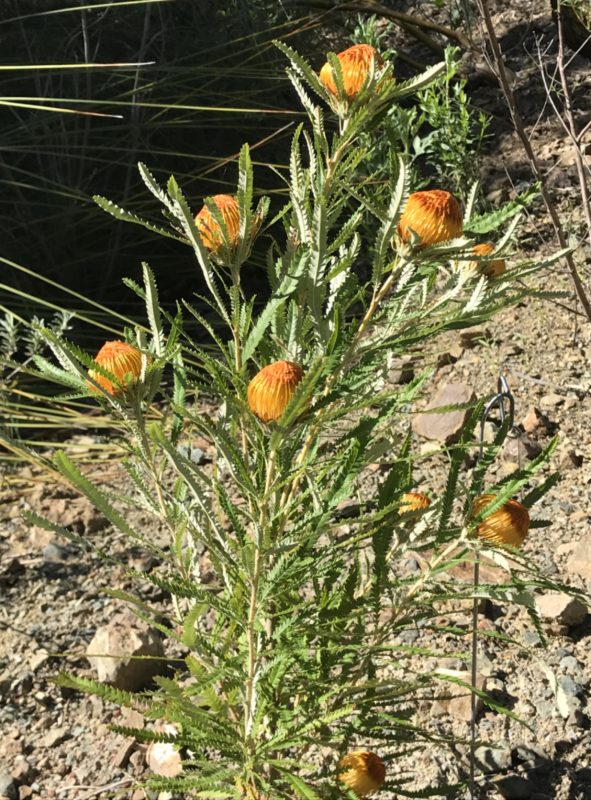 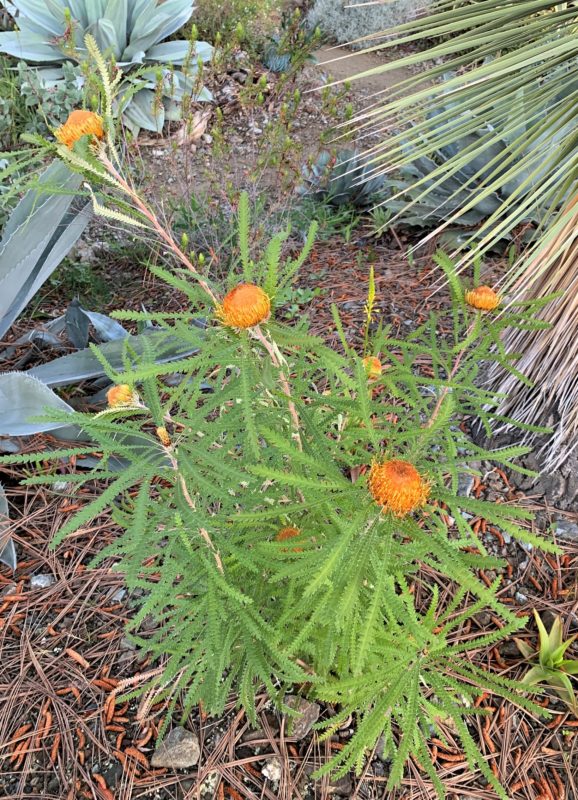 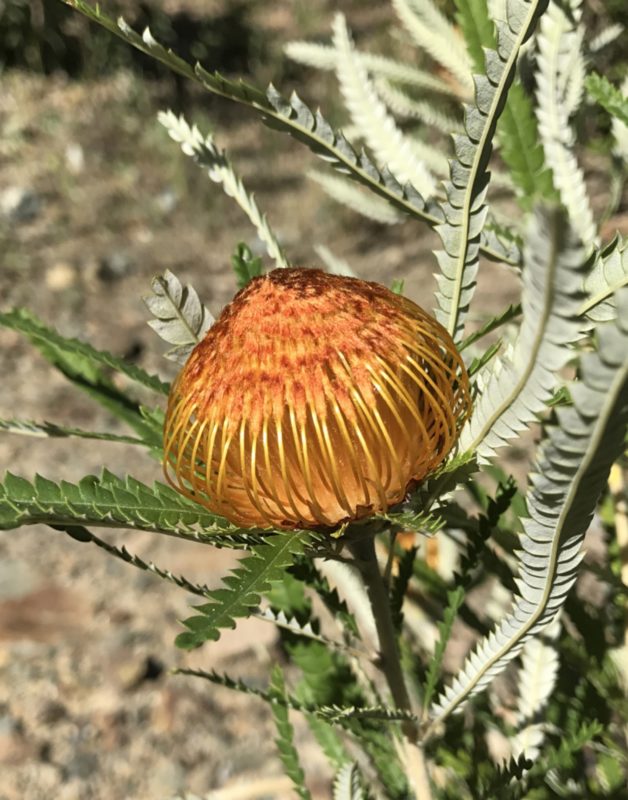