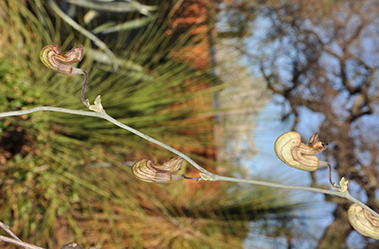 One of our state’s floral oddities is the California Dutchman’s Pipe, Aristolochia californica. This twining deciduous vine is native to Northern California’s Coast Ranges and the foothills of the Sierra Nevada. The common name refers to the unusual flowers, which are shaped like little meerschaum pipes or saxophones. They flower early in the year, in February and March, with the leaves emerging just after this. The flowers are an inch to an inch and a half long (2½ to 4 cm) and pale green in color, often with a flush of purple and with contrasting purplish-brown veins. The mouth has 3 lobes, one curling downward and 2 curling upward, and these match the color of the veins. The color of the mouth and veins is more intense on young flowers. 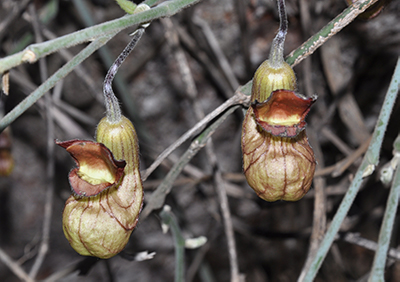 The flowers of Aristolochia californica are pollinated by tiny gnats, but this species is also host to its own butterfly, the Pipevine Swallowtail. The butterfly’s caterpillars feed on the vine’s leaves, and in the process ingest toxins to which they are immune. The toxins make them unpalatable to birds.

The leaves of Aristolochia californica are bright green 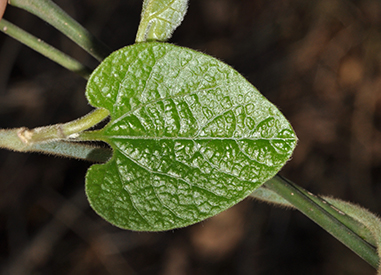 and heart shaped, with an interesting texture. Their size varies, but they may be as much as 5 to 6 inches long (12½ to 15 cm).

The genus Aristolochia belongs to the family Aristolochiaceae. Though A. californica is the only species native to our state, there are many other species found in North America, South America, Asia and Europe.