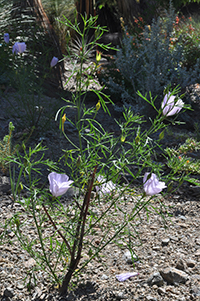 Alyogyne ‘Ruth Bancroft’ is a hybrid between Alyogyne huegelii and A. hakeifolia, two related species from southern and southwestern Australia. Alyogyne huegelii is known by the common name of “Blue Hibiscus”, and sometimes this name is used for A. hakeifolia as well, but “Lilac Hibiscus” would be more appropriate as a reference to the flower color. The flowers of the two species are indeed hibiscus-like, but they are more vase-shaped and do not open as widely. Like the genus Hibiscus, Alyogyne belongs to the Mallow Family (Malvaceae), but while Hibiscus has a wide distribution and over 200 species, Alyogyne has only four species, all Australian. 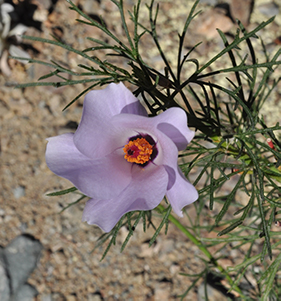 A. huegelii and A. hakeifolia both have palmate leaves (that is, with lobes which radiate like the fingers of an open hand), but the lobes of the former are slightly fuzzy and have frilly margins, while those of the latter are so narrow as to be almost needle-like. Not surprisingly, the leaves of the hybrid are in-between, quite narrow but not as needle-like as A. hakeifolia. Like its parent species, Alyogyne ‘Ruth Bancroft’ is a shrub which reaches 8 feet or more in height (2.5 m) if left unpruned, but pruning it will keep it fuller and also increase the flower production. It has a long blooming season, from late spring all the way through to autumn, and the soft lilac color of its blossoms, together with the interesting texture of its foliage, make it a garden stand-out.

Since both of its parents come from the Mediterranean-climate part of Australia, it is not surprising that Alyogyne ‘Ruth Bancroft’ does well in California gardens, appreciating our winter rains and cheerfully enduring our dry summers with very little need of watering. It requires good drainage and sun, but does well in various soil types. It came up spontaneously at the Ruth Bancroft Garden in a spot where A. huegelii and A. hakeifolia were growing alongside each other.