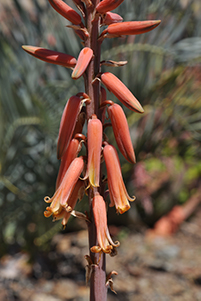 Aloe shadensis
The Arabian Peninsula is home to quite a few species of Aloe, with most of them occurring in mountainous areas of Yemen and the adjacent western part of Saudi Arabia. This is at the northern end of the distribution of the genus, which is otherwise confined to Africa and islands in the Indian Ocean. While many of the Arabian aloes make excellent garden plants, they are mostly rare in horticulture, as is the case with Aloe shadensis.

The name “shadensis” means “coming from Shada”, referring to a mountain called Jabal Shada (also spelled Jabal Sawdah) in the southwestern corner of Saudi Arabia. The species is a relatively recent discovery, named in 2000 by an English woman named Sheila Collenette, who spent years recording the flora of Saudi Arabia. Her official description of the plant was co-authored by the renowned botanical explorer and Aloe expert John Lavranos. Because it is difficult to get permission to travel in the area, very few non-Saudis have seen it in habitat. 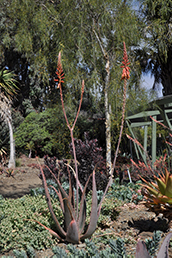 Aloe shadensis has stemless rosettes about 1½ feet in diameter (45 cm), and it typically remains single-headed. The tapered leaves are up to 6 inches wide (15 cm) at the base, and 24 inches long (60 cm). They are green in the shade, but quickly take on bronze tinges in sunnier positions. As with many Arabian species of Aloe, juvenile plants are spotted, but the spots disappear at maturity. Under drier and sunnier conditions, the leaves tend to pull together and be held more vertically, yielding a narrower profile, while in shadier conditions they spread more widely. 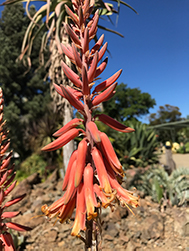 The flowering period for Aloe shadensis is in late spring to summer, beginning at the Ruth Bancroft Garden in late April to May, and ending in July or August. While young plants often have no floral branching, older ones usually have a few branches on the flower stalk, with each branch ending in a spire of flowers. The tips of the flower clusters reach a height of 40 to 60 inches (1 to 1.5 m). At the bud stage, the flowers are coral-red with a gray point, but when they open the petal tips curl back and turn yellow. Because the flowering progresses slowly from the bottom of the cluster to the top, the floral show lasts for a long time.