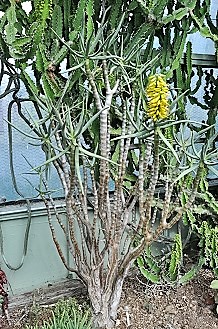 Aloe ramosissima is a shrubby species from South Africa’s arid northwest, and it is also found to the north in the southwest corner of Namibia.  This is an area of winter rainfall, but with an annual total of only about 5 inches (125 mm) and temperatures which rarely fall more than a degree or two below freezing.  It can be grown outdoors in southern 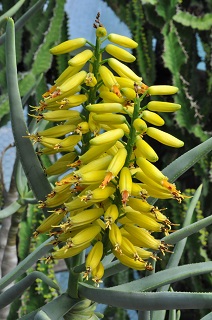 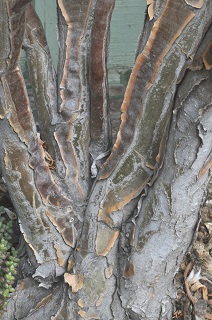 California, but at the Ruth Bancroft Garden we grow it in a greenhouse bed where the cold and excessive wet of our winters can be kept at bay.

There is a very close relationship between Aloe ramosissima and its larger cousin Aloe dichotoma, often called the Quiver Tree, and the flowers of these two are nearly identical.  Some botanists favor classifying Aloe ramosissima as a smaller form of the more widespread A. dichotoma rather than a species in its own right.  In any case, it is an attractive and unusual succulent with showy canary-yellow flowers and wonderfully-textured bark.

The flowers of Aloe ramosissima appear in November and December at the Ruth Bancroft Garden.  The inflorescence is not large (up to about 8 inches, or 20 cm), but it bears dozens of chubby tubular flowers which are each about 1⅓ inches long (35 mm).  Though an inflorescence may be unbranched, there are usually one or two side branches.