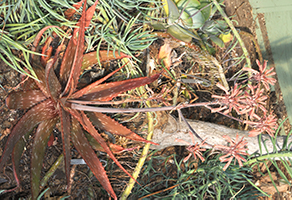 The largest and most taxonomically difficult group of aloes is undoubtedly the maculate group, including Aloe maculata and its relatives. The species in this group usually have stemless or short-stemmed rosettes of leaves, a branched flower stalk, and tubular flowers with a distinct swelling at the base. “Maculate” means spotted, and most of them do indeed have spots on their leaves, but it should be noted that many species in other groups share this trait. The maculates are particularly abundant in the eastern part of South Africa, and they are hard to classify because they are actively evolving so that there is often not much separation between one form and the next. For this reason, various writers have come to very different conclusions on where one species stops and the next one begins. However, there are some which are distinct enough that everyone can agree that they should be recognized as a species. One of these is a delightful small Aloe from the Soutpansberg mountain range in South Africa’s northeast: Aloe petrophila. 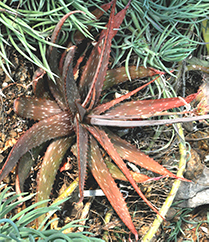 Like many of the aloes in the Maculate group, Aloe petrophila is a stemless suckering species, though it does not put out as many offsets as some others. It usually has spots on its leaves, though in some specimens these are lacking, but it also has attractive stripes running down the length of the leaves. In a sunny position, it takes on a brownish red-orange color. 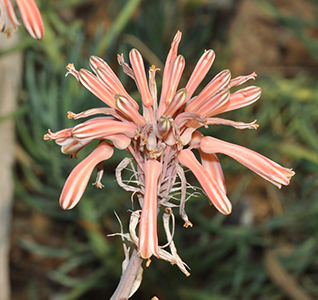 Aloe petrophila is winter-flowering, coming into bloom in May or June in its native South Africa, and in November to December here in California. Its flower stalks are not tall, usually about a foot and a half or a little more (50 cm), and they have multiple branches which each end in a cluster of striped pink flowers.

The northeastern part of South Africa, where Aloe petrophila is found in nature, gets most of its rainfall in summer and has dry winters. However, A. petrophila does not mind winter rain as long as it gets good drainage and is not exposed to temperatures too far below freezing.