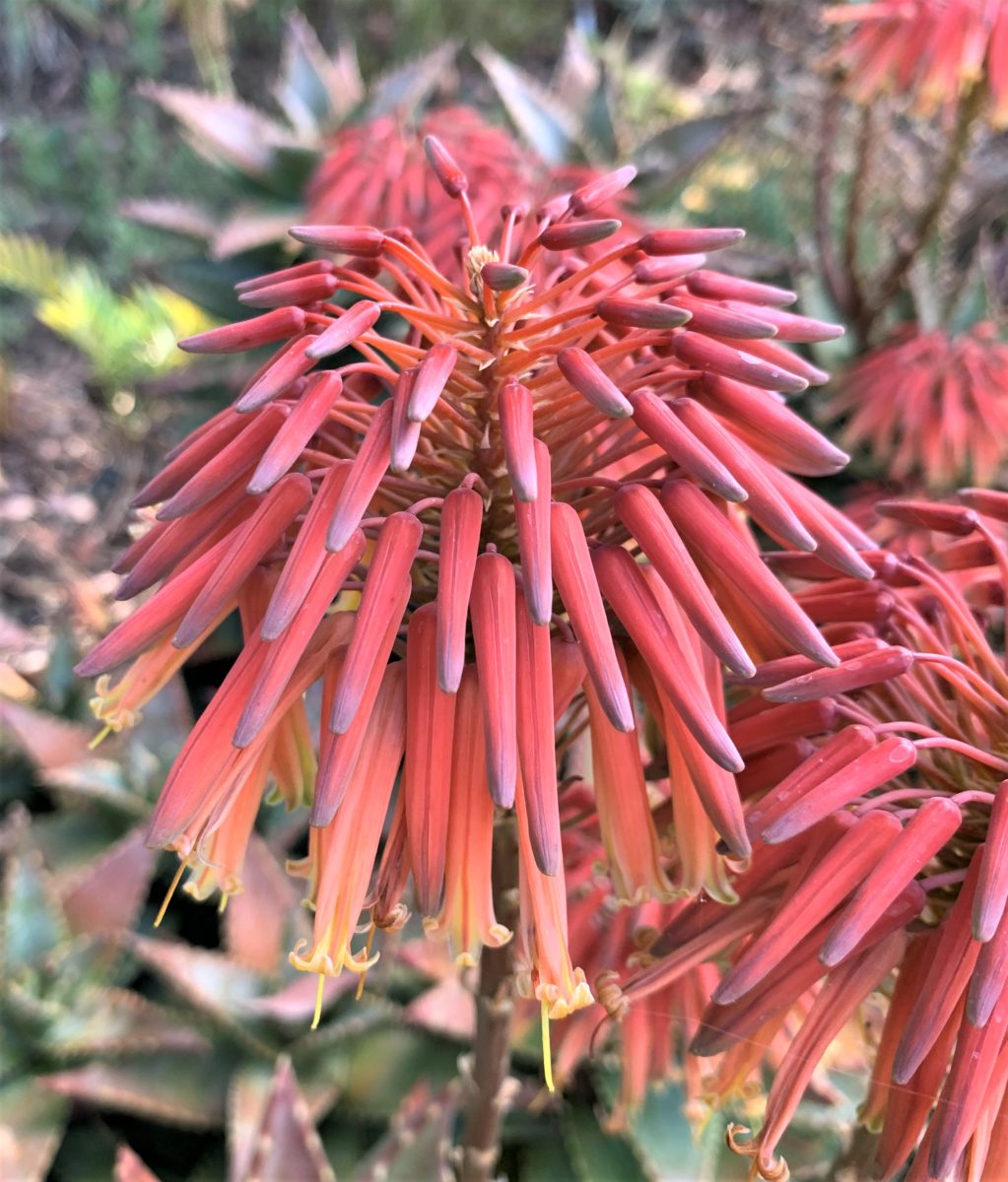 Among South Africa’s many species of Aloe are Aloe pearsonii and Aloe distans, two related species from the winter-rainfall region in the western part of the country. Both have limited distributions, with Aloe distans occurring on the coast a little north of Cape Town, and Aloe pearsonii over 500 km (300 miles) to the north in the Richtersveld. This distance is significant, because the rainfall on the country’s west coast decreases as one goes north, so the annual precipitation is far greater for Aloe distans than it is for Aloe pearsonii (520 mm/20 inches vs. 125 mm/5 inches). Neither species thrives in summer-rainfall areas, and when the comment is made in Guide to the Aloes of South Africa that A. distans “does not do well outside of its natural habitat”, this is aimed at growers who experience humidity and precipitation in the summer months; in Mediterranean-climate areas such as coastal California, it is among the easiest species to grow. Because of its extremely arid environment, A. pearsonii is more finicky, and care should be taken to give it extremely good drainage and limited water, especially in summer.

Aloe distans is essentially a smaller relative of Aloe mitriformis, differing in its smaller and greener leaves with bright yellow teeth, and having flower heads which are generally less rounded (more flattened on top). Its multiple stems creep along the ground horizontally, instead of growing upward. It blooms in summer, with a branched flower stalk bearing 2 to 5 clusters of tubular coral-red flowers. A more conservative taxonomic approach would be to consider A. distans as merely a local form of A. mitriformis, rather than a separate species.

Aloe pearsonii is also a clump-forming plant, but with an upright growth habit. It has triangular leaves which bend downward against the stem, and these redden strikingly if gown in full sun and not watered too much. Like Aloe distans, it is summer-blooming, but with fewer flowers per cluster. The flower color may be red or yellow.

When I, Brian Kemble, decided to cross the two species in 1991, my thought was to have a plant with upright growth and colorful leaves, like A. pearsonii, but easier to grow and with bigger flower clusters, like A. distans. I used the red-flowered form of A. pearsonii as the mother*, and expected the resulting seedlings to have red or coral-red flowers, but the flower color of the offspring proved to be variable. Some plants have coral-orange flowers which turn pale yellow as they reach maturity, while others are more red. The flowering period is in late June to July, which would correspond to late December to January in the Southern Hemisphere. In all cases, the leaves color up wonderfully, taking on purple or coral tinges if not grown in too much shade. The stems grow erectly, like Aloe pearsonii, but with larger leaves which are held perpendicular to the stems, rather than curved back against the stems as with A. pearsonii.

When the seedlings were still young, I sent several of them to John Trager at the Huntington Botanical Gardens, and he propagated these vegetatively. In 2007, one of them was named Aloe ‘Hellskloof Bells’ and offered for sale through the International Succulent Introductions (ISI) program as (ISI 2007-13). Since then, a number of nurseries in California have grown and sold it, so it has made its way into the horticultural trade.

Note that the photos shown here are of several plants of Aloe pearsonii × distans growing at the Ruth Bancroft Garden, not the particular clone distributed as ‘Hellskloof Bells’.

*I applied pollen from A. distans on several occasions beween 17 July and 29 July 1991. The seed pods ripened in September of that year, and the seeds were sown on 22 April, 1992. 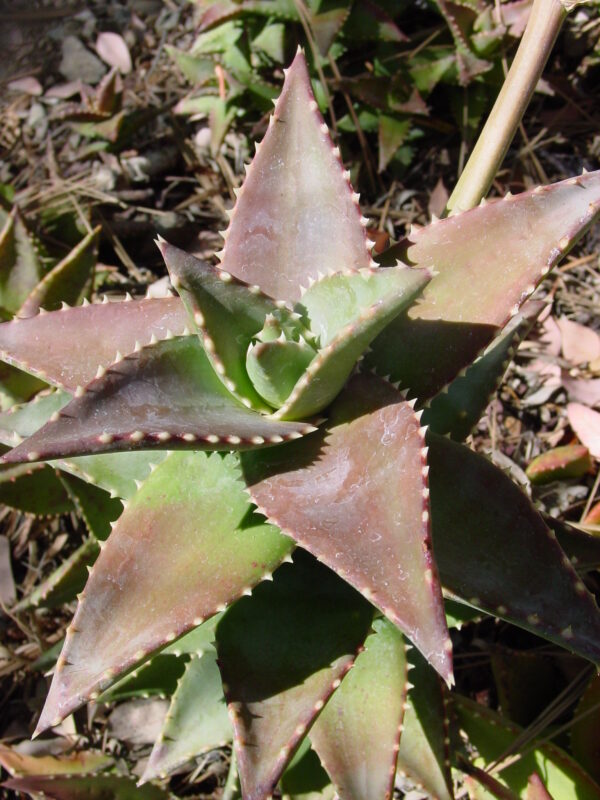 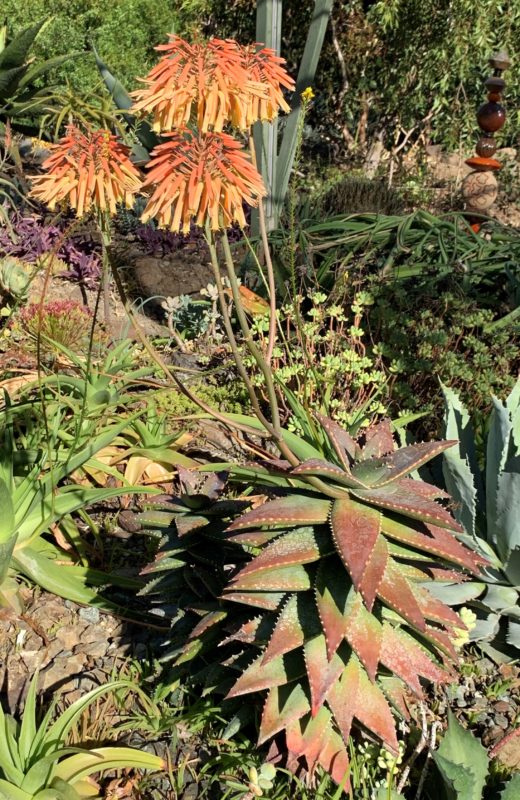 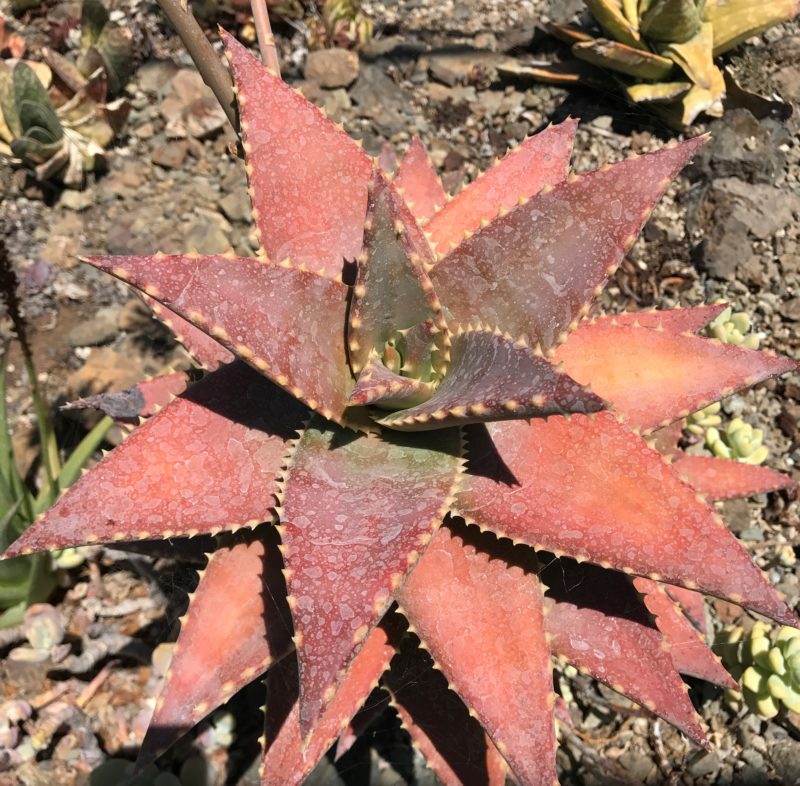