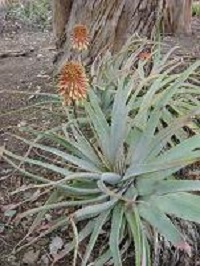 One of the most commonly grown aloes in the Bay Area, and also in southern California, is Aloe arborescens.  It has two close relatives with much smaller areas of occurrence in nature, and one of these is Aloe mutabilis.  This species comes from the northeastern part of South Africa, where it grows on cliffs and steep rocky slopes in the highland area near Johannesburg.

Some authorities think that Aloe mutabilis is close enough to A. arborescens that it should be classed as a subspecies or form, rather than a species in its own right, but it differs in several respects.  For one thing, the leaves of Aloe mutabilis are blue-green in color, while those of A. arborescens are generally green.  Also, Aloe mutabilis has stems that seldom reach more than 3 feet in length (often creeping along the ground), and it branches somewhat 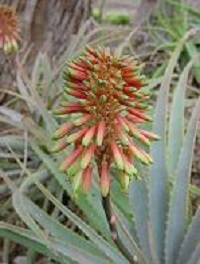 sparingly.  In contrast, A. arborescens is a prolific brancher and grows to be a much larger and bushier plant over time.  There are floral differences as well.  The most striking distinction is that in most populations of Aloe mutabilis the flowers change color as they mature, with the red buds giving way to yellow (or yellow-tipped) open flowers.  This changeability is presumably the source of its name (mutable = changeable), and this contrasts with A. arborescens, whose buds and open flowers are of the same color.  In addition, the flowers of Aloe mutabilis are a little shorter, and they tend to be a little wider at the mouth instead of evenly tubular as with A. arborescens.  Both species flower during the winter months, and provide a welcome splash of color in the garden, inviting to both people and hummingbirds.  Of course, hummingbirds do not occur in Africa, and in habitat it is sunbirds which visit the flowers instead.