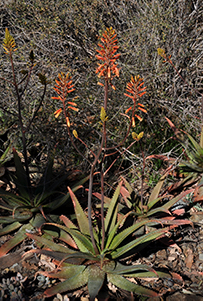 One of the largest groups of species in Aloe is the one referred to as the “maculate aloes”, applied to Aloe maculata and its relatives. Maculate means spotted, and indeed most of the species in the group have spots, though quite a few species in other groups have them as well. The maculate aloes are generally stemless or short-stemmed, but what really sets them apart from other aloes is the pronounced swelling of the base of the flower. One of the species in this group is Aloe mudenensis, from the area near the town of Muden in the state of KwaZulu-Natal. 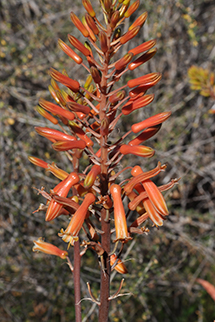 Aloe mudenensis may be single-headed, or it may put out a few offsets to form a small clump. Rosettes grow to a diameter of 1½ to 2 feet (45 to 60 cm), with the spotted leaves becoming purplish-tinged in sunny positions. Like other related species, its leaf tips tend to die back, but this is a natural characteristic of the plant and not a sign of distress. It starts out stemless, but eventually it may develop a stem of up to a foot or 2 (30 to 60 cm).

This is a winter-flowering species, coming into bloom at the Ruth Bancroft Garden in January or February and ending in April. The flower stalk rises to a height of about 3 feet (1 m), with several branches, each one ending in a round-topped cluster of flowers. The flower color ranges from yellow-orange to orange to coral-red.

The area where Aloe mudenensis comes from is sub-tropical, so it is remarkable that it 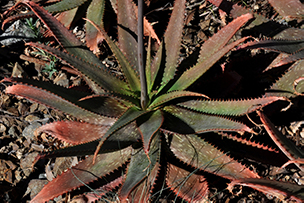 does so well in Walnut Creek’s frosty spells in winter. Severe cold snaps, with temperatures below 28° F (-2° C), have the potential to damage emerging flowers, so placing plants where there is some overhead protection is a good idea in localities where such lows are likely.