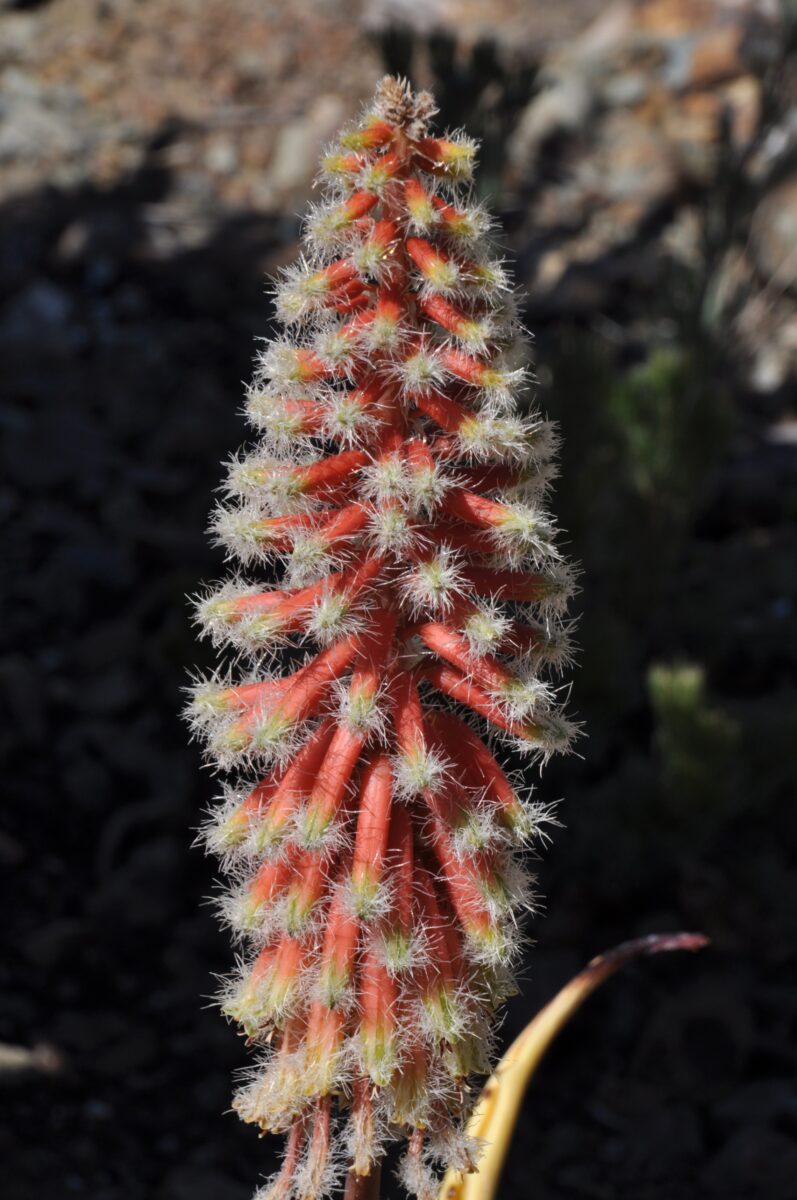 Some groups of plants, such as the kangaroo paws (Anigozanthos species), commonly have hairy or fuzzy flowers, but there are a few Aloe species with this trait, and these are found in northeastern Africa and across the Red Sea on the Arabian Peninsula. One such species is Aloe lavranosii, from Yemen.

Aloe lavranosii has a fairly extensive aea of occurrence in the southwestern part of Yemen, to the north of the port city of Aden. The flowers of the species are variable in color, length and in the extent of their hairiness. This variability resulted in two additional names being bestowed on it: Aloe doei for a yellow-flowered form, and Aloe splendens for a hairless red-flowered form. However, further investigation showed that these were only local forms of a single variable species, with the flower color ranging from red to pink to orange to yellow. Some plants have flowers entirely without hairs, but more commonly there are long wispy white hairs, either along the length of the flower or clustered at the mouth. These hairs catch the light and produce a halo-like glow when the flowers are back-lit.

Plants of Aloe lavranosii are stemless and usually solitary, but occasionally they may divide at the growing point to produce a two-headed or several-headed specimen. The tapered leaves are up to 2 feet long (60 cm), and as much as 6 inches wide at the base (15 cm). While the leaves of young plants are spotted, the spots are seldom present on full-grown plants. The basic leaf color is a light gray-green, but plants are often tinged brownish or purplish unless they are in a shaded position. The leaf margins are edged with a narrow band of reddish-brown, with small but sharp teeth at regular intervals.

This species is summer-flowering, with plants in habitat flowering mainly in July and August. At the Ruth Bancroft Garden, our plants typically begin flowering in late June or early July, and finish by early August. Younger plants flowering for the first time may have inflorescences without branches, but mature plants have at least a few branches, and sometimes more than a few. On robust specimens, the lower floral branches may even re-branch, with a total of as many as 15 racemes and an overall height of 5 feet (152 cm) or more. Though plants often have one inflorescence per year, it is not unusual for them to have two, or even three, with the others following in quick succession so that there is a substantial overlap in their production of flowers. The flower length varies from 1 inch (25 mm) up to 1.3 inches (33 mm).

The seed capsules of A. lavranosii are up to .8 inch long (2 cm), and as with other Aloe species they contain 3 chambers. The chambers contain stacks of small winged seeds. At maturity, the capsules dry out and split open to release the seeds. 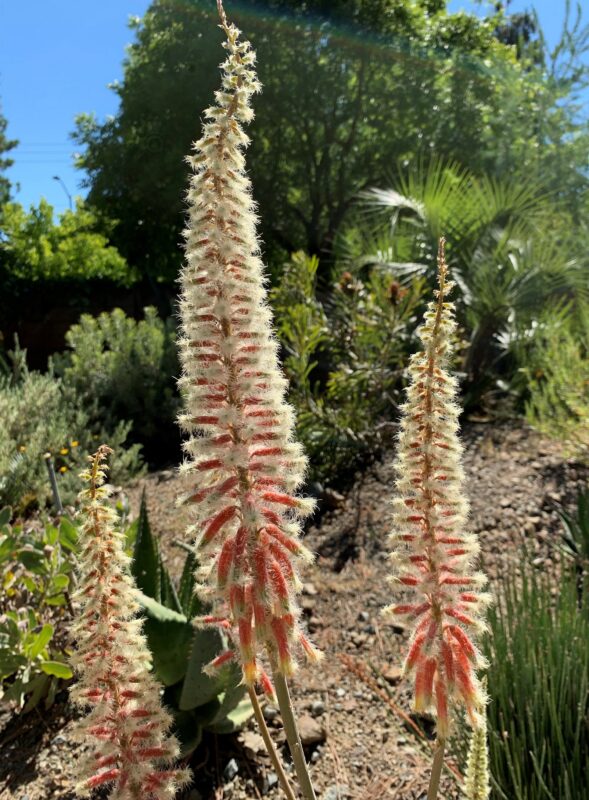 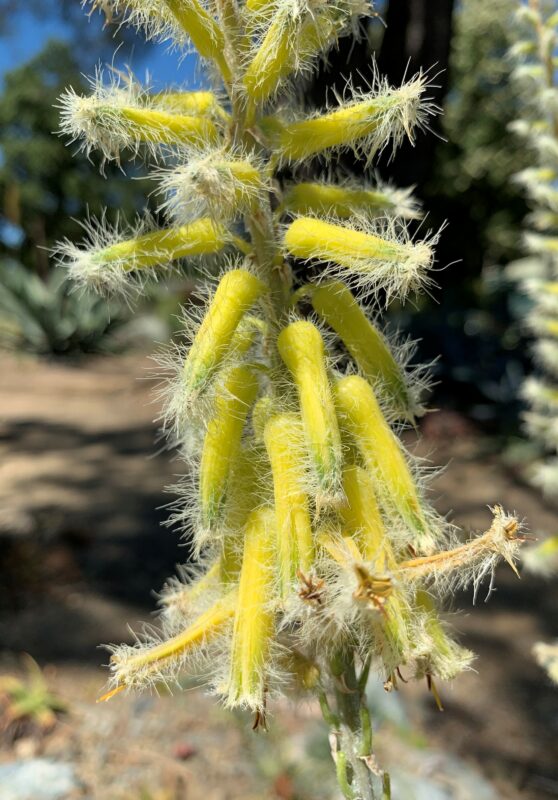 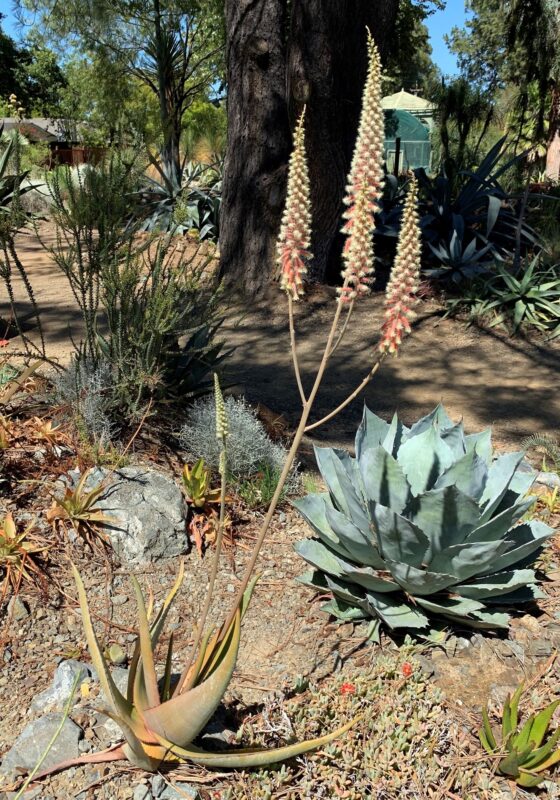 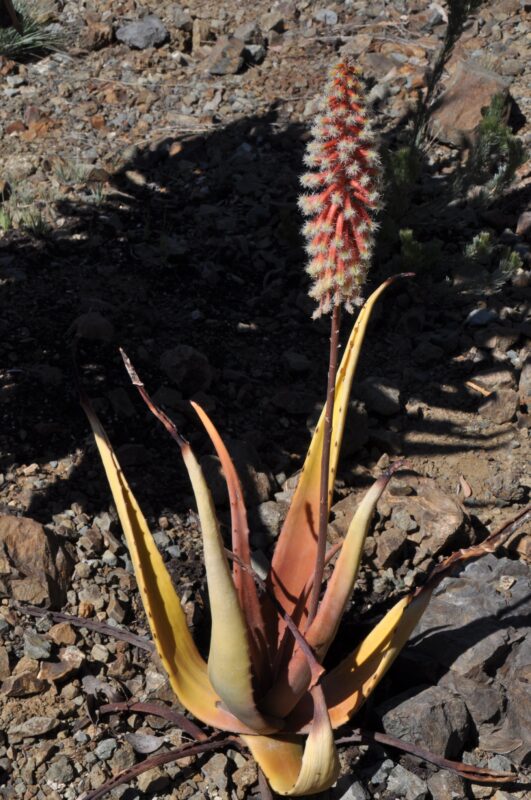