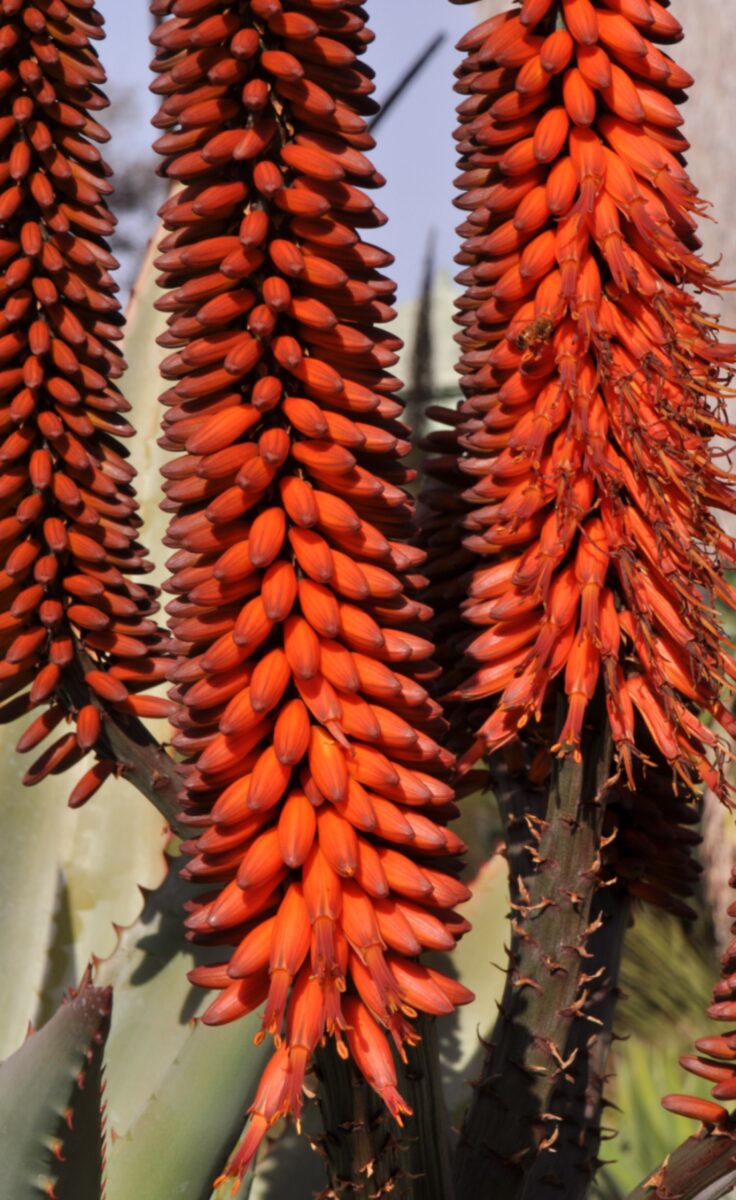 South Africa has several tall-growing single-stemmed species of Aloe that make spectacular flower displays in winter. One of these is Aloe ferox, with an extensive distribution in the southern and southeastern part of the country. The western end of its range is near Swellendam in Western Cape Province, while the eastern end is in southern KwaZulu-Natal Province – a distance of about 750 miles, or 1,200 km. This species is important commercially, because the juice from its leaves is used for many of the same purposes as that of Aloe vera: healing ointments, skin creams, shampoos, etc.

Mature specimens of Aloe ferox typically reach a height of 6½ to 10 feet (2 to 3 m), but exceptionally tall specimens may be 13 feet (4 m) or more. The woody trunk is hidden from view by the dense skirt of persistent dried leaves, and above these is the rosette of dull-green or bluish-green living leaves. Under extended dry conditions, the whole plant may be reddish. The leaves are up to 40 inches long (1 m) and 6 inches wide at the base (15 cm), gradually tapering to the pointed tip. The leaf edges are lined with sharp reddish or brownish teeth that average about ¼ inch long (6 mm) and are spaced 4 to 8 inches apart (10 to 20 mm). In some populations, particularly toward the west end of the distribution of the species, the leaves may also have prickles scattered across their surfaces.

Aloe ferox is mainly a winter-flowering species, though the timing may be earlier or later according to the location. Plants in warmer climate zones tend to flower earlier, while those in the coldest parts of its range may not flower until spring. At the Ruth Bancroft Garden in Walnut Creek, California, the peak flowering season is usually January to March (winter in the Northern Hemisphere), but plants in habitat experience winter at the opposite end of the year.

The flower stalk emerges from between the leaves, and it branches near its base to form a dramatic candelabra-like group of erect densely-flowered cylindrical racemes. Plants commonly have 4 to 8 racemes (spires of flowers), but robust specimens may have even more than this. The flowers themselves are tubular (with a slight widening at the middle) and have an average length of about 1.3 inches (33 mm), not counting the stamens and pistil that protrude from the flower’s mouth. Rather than extending outward at right angles to the floral branch, the flowers are angled slightly downward. Although a bright orange or red-orange is the most common flower color, there is much variation in this (sometimes even within one population). The racemes may be all of one color, but sometimes they are strikingly bicolored, and when this is so the buds are always a darker hue than the open flowers. The full range of possible colors includes red, orange, pink, yellow, white and combinations such as red/white or orange/yellow.

Plants from the eastern end of the range, in southern KwaZulu-Natal Province, were once classified as a separate species, Aloe candelabrum, but most taxonomists today do not feel that the points of distinction between the two are sufficient to justify two names. The KwaZulu-Natal plants differ in having somewhat larger rosettes with the leaves more channeled and with the leaf tips tending to bend slightly downward. They often have a larger number of racemes (up to 12), and the central one is typically a little taller than the others. The flowers themselves have white tips, while other plants of A. ferox commonly have brown tips on the inner 3 tepals.*
If pollinated, Aloe ferox produces barrel-shaped seed pods about ⅝ to ⅞ of an inch long (16 to 22 mm). Within are 3 chambers holding columns of brown seeds whose edges have small papery wings. At maturity the pod splits open to release the seeds.

*In many monocots, including the aloes, there are not distinctly different petals and sepals, so the neutral terms “tepal” or “perianth segment” are used instead. 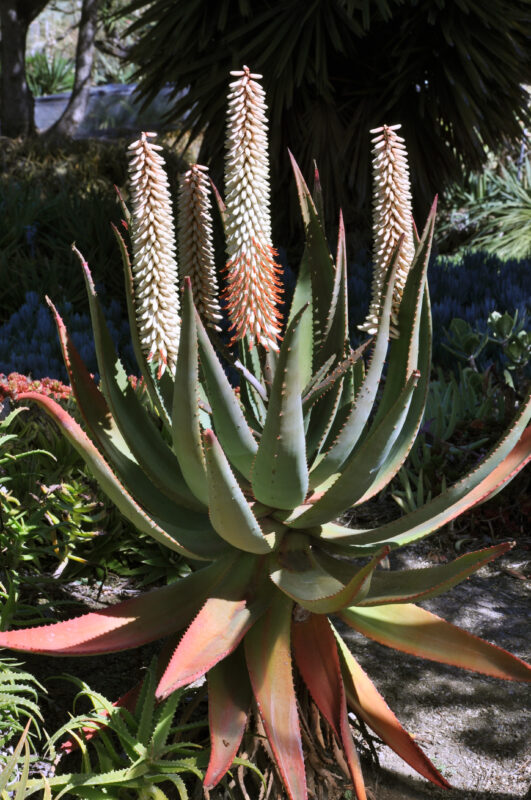 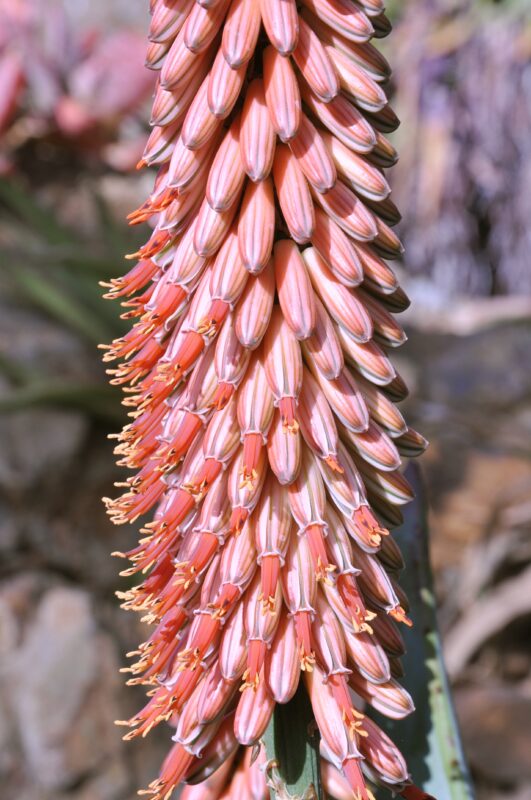 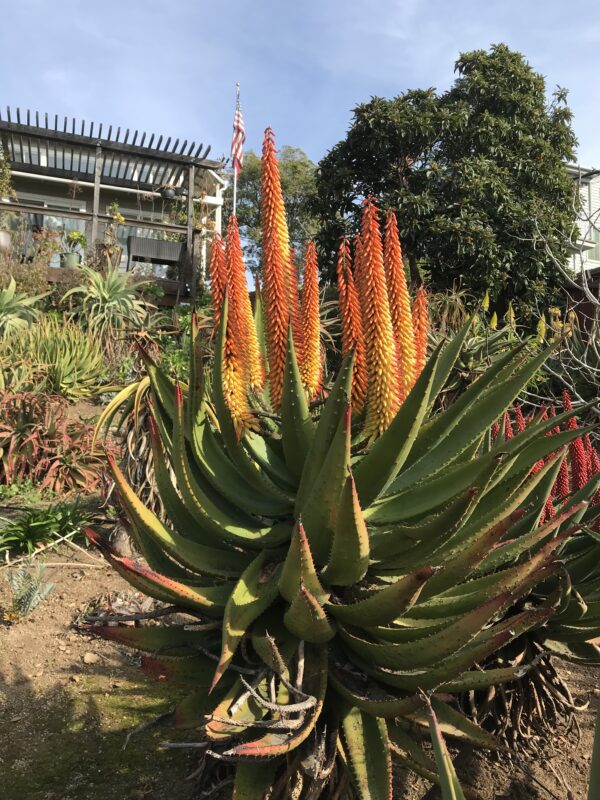 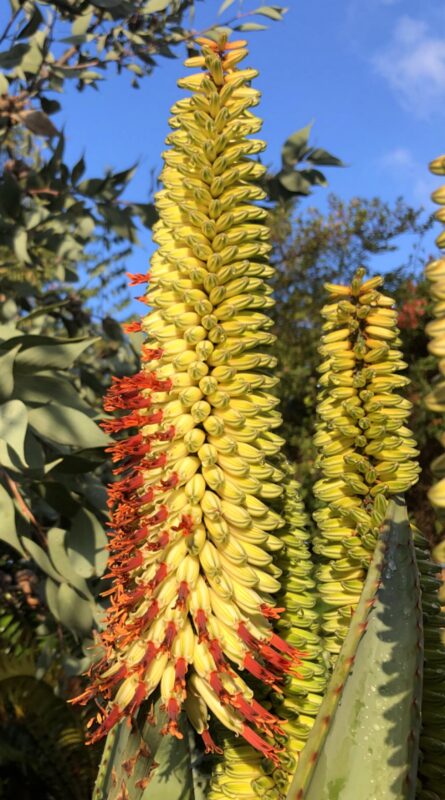 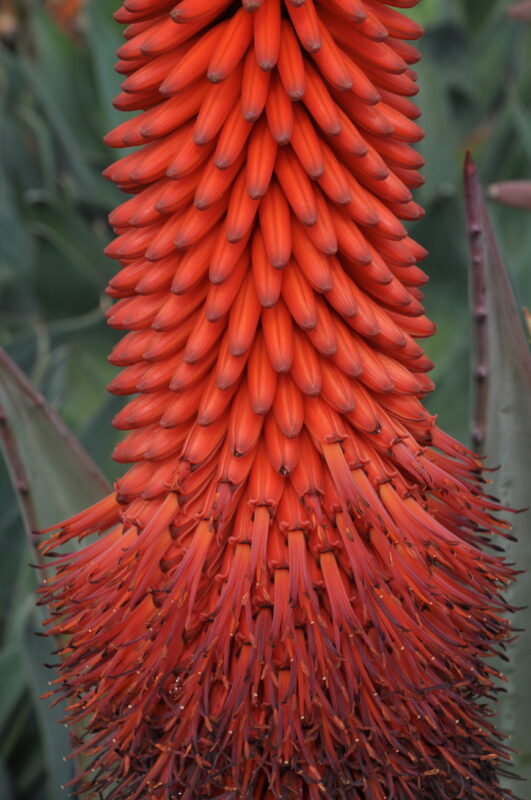 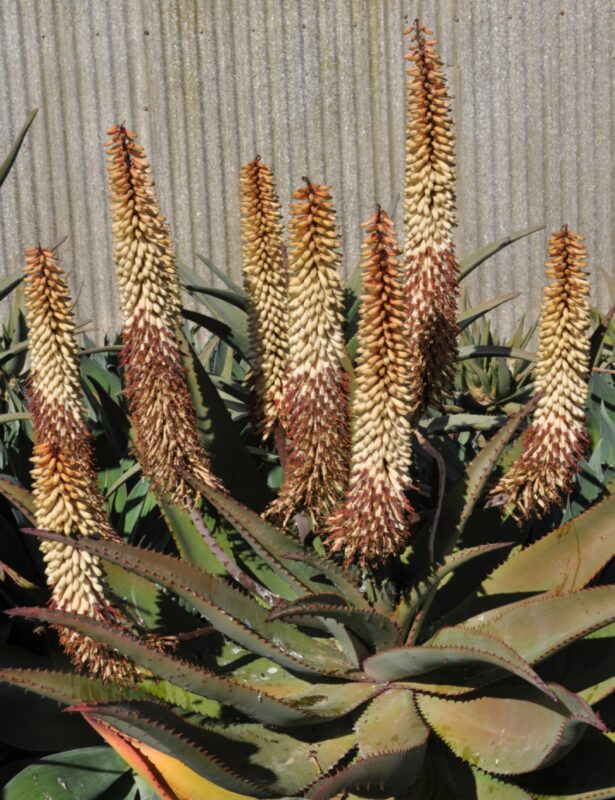 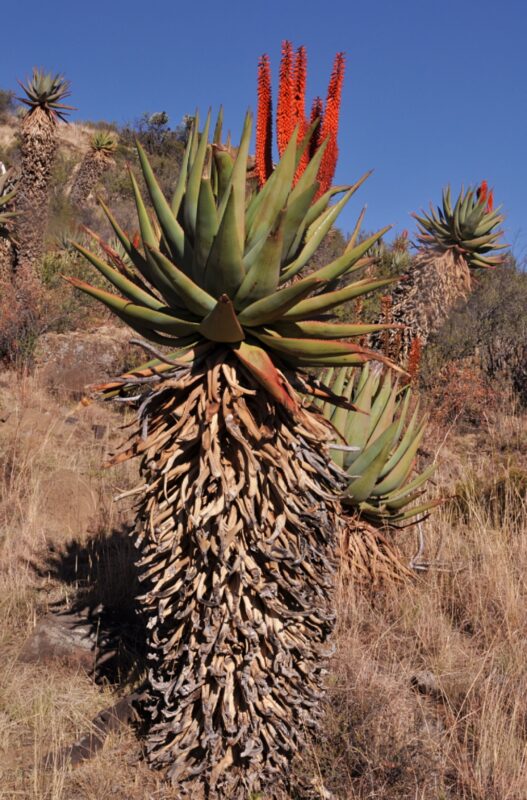