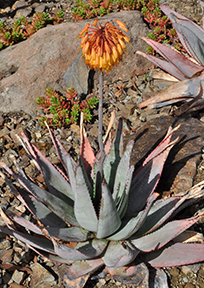 The island nation of 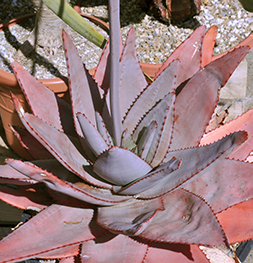 Madagascar, which lies to the east of southern Africa in the Indian Ocean, has many wonderful species of Aloe. One of these is Aloe capitata var. quartziticola, native to the southern part of the island’s central highlands.

This single-headed plant has stemless rosettes to 2 feet across (.6 m). The fleshy tapered leaves are a milky blue-gray color under less sunny conditions, becoming purple-tinged with stronger sun. The margins are edged with small triangular dark red teeth. 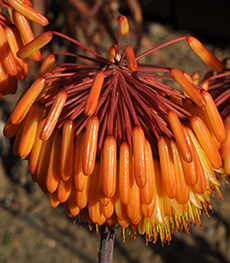 lf of winter (typically in February at the Ruth Bancroft Garden), rising to a height of 3 feet or more (1 m). Each branch is topped with a rounded head of flowers, tubular at the bud stage and widening at the mouth when they open to become narrowly bell-shaped. The buds are a vivid glossy orange, while the open flowers are yellow. Unlike most other species of Aloe, this one’s flowers do not necessarily open in sequence from bottom to top, often starting somewhere in between. The long pedicels (the stalks of the individual flowers) are reddish.

In nature, Aloe capitata var. quartziticola grows on quartzite at altitudes of up to 1600 m (over 5,000 ft.). Unlike most of the species of Aloe found in Madagascar, it can endure freezing spells if these are not too severe. Plants in California gardens have survived lows of 20° F (nearly -7° C) when planted on slopes where the cold air does not collect.