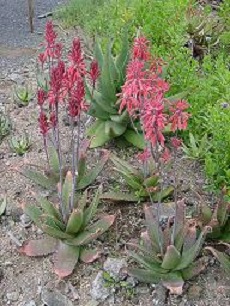 One of the largest groups in the genus Aloe is the one referred to as the “maculate aloes”, the majority of which are found in South Africa.  The term “maculate” means spotted, and Aloe maculata is also the name of a species which is a widely-grown member of this group.  Although spotted leaves are found in most of these aloes, Aloe affinis is an exception.  It is often entirely lacking in spots, though plants sometimes have some.  Like most other maculate aloes, it is a stemless species with branching flower stalks bearing flowers with a bulbous swollen base.

Aloe affinis is native to northeastern South Africa, in an area where the rains come in summer, though it 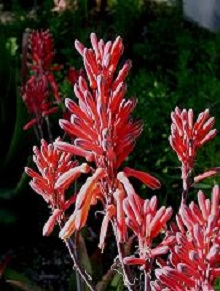 tolerates our winter rains.  Its green leaves have lengthwise striping and are edged with a narrow dark brown border bearing sharp teeth.  It flowers in winter, coming into bloom in February and March at the Ruth Bancroft Garden.  The flower stalks, rising to a height of about 3 feet (1 m), have side branches, each topped by a conical raceme of flowers, becoming rounder as the flowering progresses.  There may be as many as 10 branches, though our plants have never had this many.  The flower color varies from reddish-pink to deep red, with some striping visible toward the tips, where darker bands alternate with lighter ones.  Plants usually remain single rather than forming a clump.