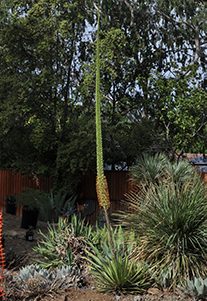 Some species of Agave are very localized, while others occur over a wide area. One of the latter is Agave schidigera, native to a large part of western and central Mexico. It is similar to the related Agave filifera, but differs in being single rather than clump-forming, and in having somewhat longer and more pliable leaves. 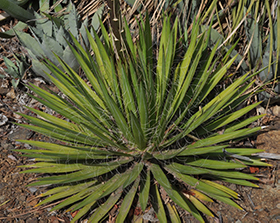 ra has two attractive traits found in a number of Agave species: ornamental curling threads along the margins of the sword-like leaves and decorative white lines which look as if they had been painted on the leaf surfaces. The rosette of leaves for this species is typically about 2 to 2½ feet across (60 to 75 cm), but our flowering specimen is a little more than this: 35 inches (89 cm).

Like other species of Agave, A. schidigera has monocarpic rosettes, meaning that they come into flower only once at the end of their lives. As a species which is normally single-headed, this means that it must be re-started from seed with each generation. How long it takes for a plant to reach maturity depends on the growing conditions, but our plant is flowering at about 10 years of 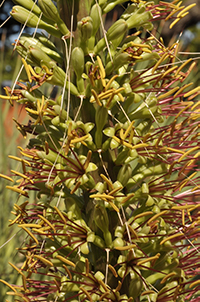 The flowering stalk of Agave schidigera has no branches, so the hundreds of flowers are arrayed along the stalk itself, opening first at the bottom and then progressing upward. The stalk height can vary from 8 feet to 15 feet, and ours is near the upper limit of this. The flowers of our plant are pale yellow and about 3 inches long (7½ cm) to the tips of the stamens, which extend well beyond the ends of the tepals (the term tepals is applied to plants which do not have a clear distinction between petals and sepals). Other plants of this species may have green or purple-tinted flowers.