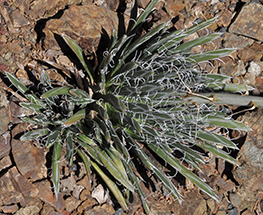 The leaves of Agave parviflora ssp. flexiflora are sword-like and 6-12 cm long (2⅓ to 4¾ inches). They have tiny teeth along the edges toward the base, but these are not at all obvious compared to the fibers which curl decoratively from the leaf edges higher up. In addition, there are white lines which look as though they had been painted on the leaf surface, a trait shared with a number of other species including A. victoriae-reginae. The leaf comes to a sharp point at the tip. Plants may be single, but often they produce offsets to form a small cluster.

Agave parviflora ssp. flexiflora flowers in May and June, with the slender stalk rising to a height of 1.5 to 2.5 m (60 to 100 inches). The taller of our two flowering plants at the Ruth Bancroft Garden tops out at 1.85 m (73 inches). The flowers are about ⅔ of an inch long (17 mm) and are held in small clusters at intervals along the stalk. Their narrow bases are green and appear to be cylindrical, but on close inspection they ca 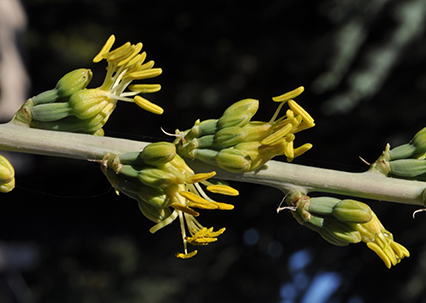 n be seen to be rounded-triangular in cross-section. There is a slight constriction at the middle, and then they bulge out at the base of the tepals (this term is used for flowers when the distinction between sepals and petals is difficult to determine). The tepals are greenish-yellow at their bases, fading to pale yellow at their pinched tips, which open just enough to allow the 6 stamens and the pistil to protrude. The pollen provides a dash of bright yellow.

Agave parviflora ssp. flexiflora  cold-tolerant to at least 20° F (-7° C), and is not difficult to grow as long as it is watered sparingly and is provided with excellent drainage.