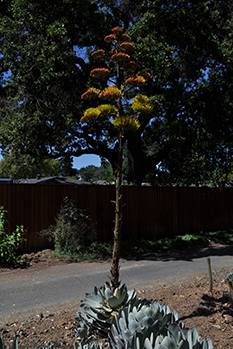 Agave parryi is a popular garden subject, prized for its compact artichoke-like rosettes as well as the way its silvery-gray leaves contrast with its black teeth and end-spines. It has the additional advantage of being very cold-tolerant and easy to propagate from the many offsets that pop up around the mother plant. 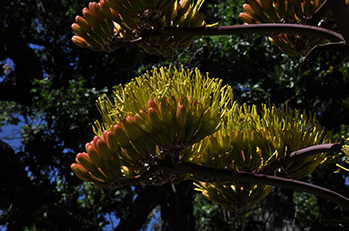 The plant pictured is known as Agave parryi var. truncata ‘Huntington Clone’, but this is problematic: truncata as a variety is distinguished from the typical form by its much smaller size, yet the Huntington clone is actually on the large side. This throws into doubt the validity of the variety, or at l 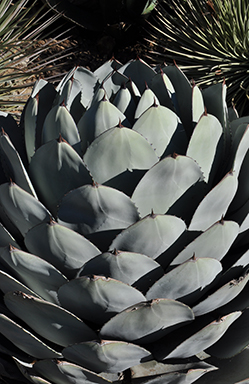 east the inclusion of the Huntington clone within it. In any case, the plant is a living sculpture, and its stalk bearing yellow flowers makes a delightful addition. Before the buds open they are strongly red-tinged, but this gives way to a bright yellow when the flowers open. Some forms of Agave parryi do not have the red buds, but it is an attractive feature when present.