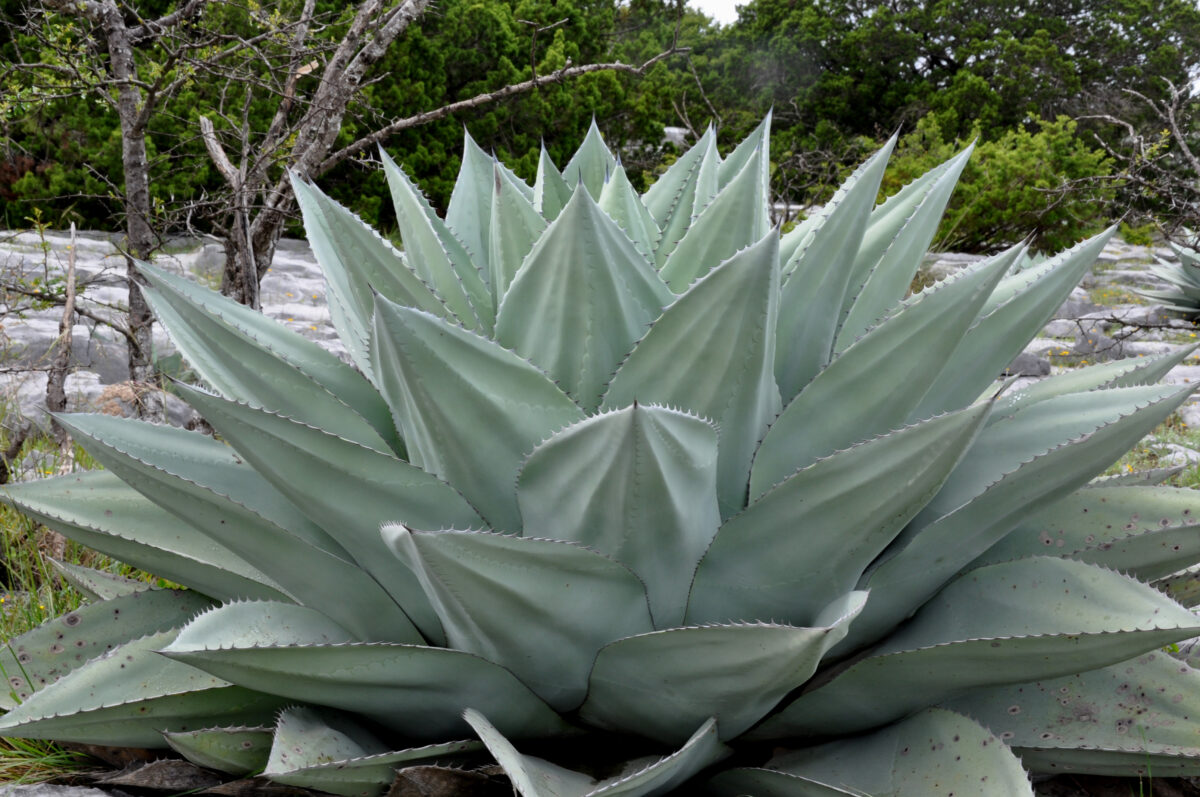 It may seem surprising that a plant as striking as Agave ovatifolia was not scientifically described and given its name before 2002, but this is because its locality is far from any public road. To see its habitat, one must get permission from a land owner and drive up into the mountains on a small dirt road. Up on the mountain top, however, it is quite abundant, with plants scattered among limestone slabs and boulders.

Agave ovatifolia is related to the widely grown Agave parryi, and its attractive rosettes of blue-gray leaves are reminiscent of that species. However, A. ovatifolia is a larger plant, with rosettes up to 6 feet across (1.8 m), and unlike A. parryi it does not normally make any offsets. Some plants of A. ovatifolia have shallow furrows extending up the leaf surface, especially striking on the lower surface of the leaf (the side facing outward on the younger leaves at the center of the plant), but this is not a consistent feature.

The thick leaves of Agave ovatifolia are pale blue-gray and about 18 to 24 inches long (46 to 60 cm), with a width of 9 to 11 inches (23 to 28 cm) near mid-blade, where they are widest. There are small but sharp teeth along the margins, up to a half-inch long (12 mm), and these are initially black, turning grayer as they age. At the tip of the leaf is a sharp spine about ¾ inch to 1 inch long (2 to 2.5 cm), with the same color as the marginal teeth.

As usual for Agave species, the rosettes of A. ovatifolia are monocarpic, meaning that they come into flower and then set seed only once, at the ends of their lives. With some other species, offsets are produced, so that there are other rosettes to continue, but since A. ovatifolia does not do this, the flowering event is the end of the road. At the Ruth Bancroft Garden, our first flowering of the species was in 2020, but we have had multiple plants come into bloom since, with the flowering generally taking place in late spring to summer (June – July). The flower stalk emerges rapidly in spring, at first looking like a gigantic asparagus spear, and then putting out floral branches in the upper half (or upper two-thirds) of the inflorescence. Each floral branch ends in a cluster of flowers, with the lowest branches being the longest and the first to open. The flower length is about 2.6 to 2.9 inches (67 to 74 mm). The flowers are held erectly, with the bottom portion (the ovary) being slender and green, while the wider upper part is pale yellow, with a flush of red at the bud stage. The degree of reddening varies from plant to plant, and on individuals with more of it, the tinge may persist when the flowers are open. Often, however, the open flowers are grenish-yellow, with an extra dose of brighter yellow from the large pollen-bearing anthers that emerge from the cup of the flower. Within the cup is a dollop of nectar to attract pollinators, and various creatures, from insects to birds to bats, may come calling to take advantage of the bounty. The inflorescence on typical plants ranges from 11½ to 13 feet high (3.5 to 4 m).

As is usual in Agave species with branching inflorescences, A. ovatifolia develops dark brown clindrical seed pods that are held erectly (just as the flowers were that preceded them). At maturity, the pods split open, starting at the tips, allowing the seeds to spill out. The seeds are D-shaped, black and shiny. 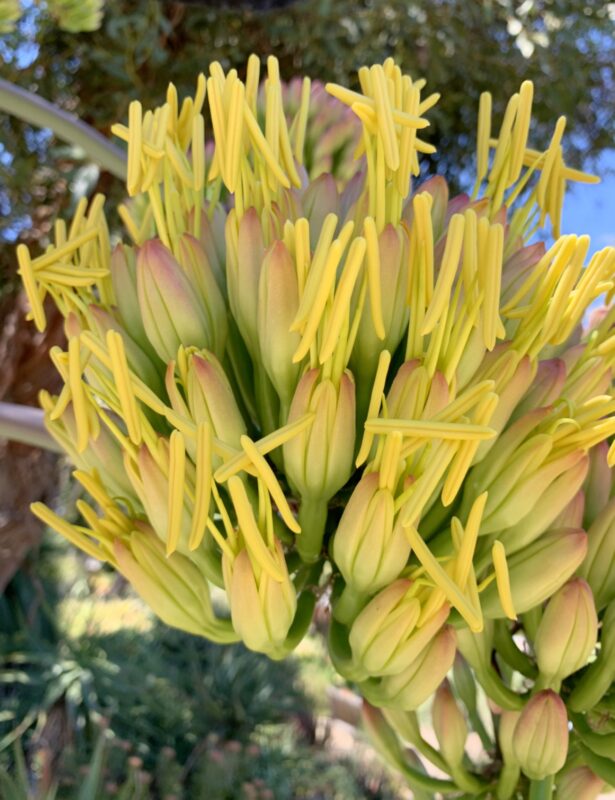 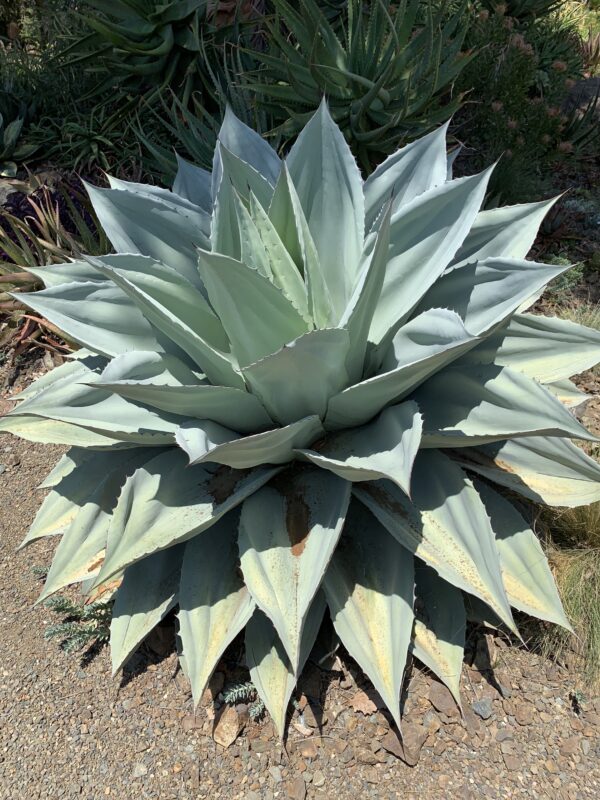 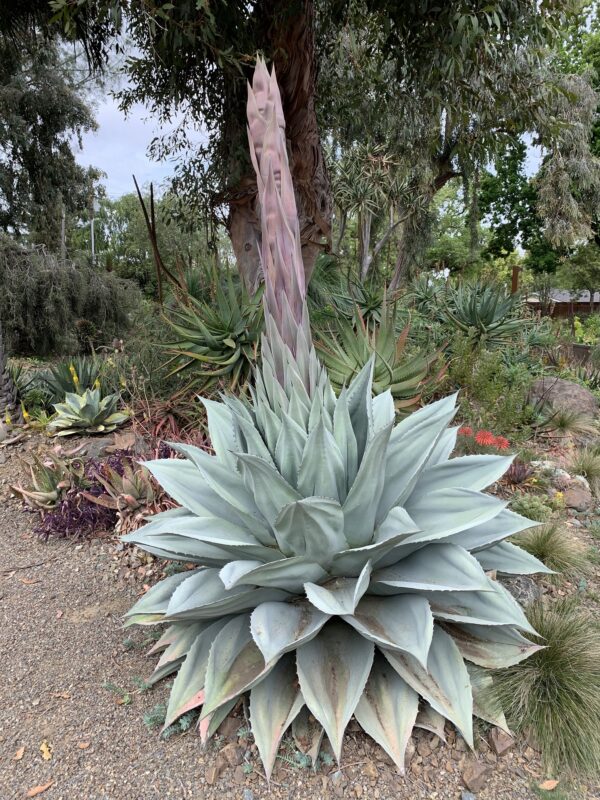 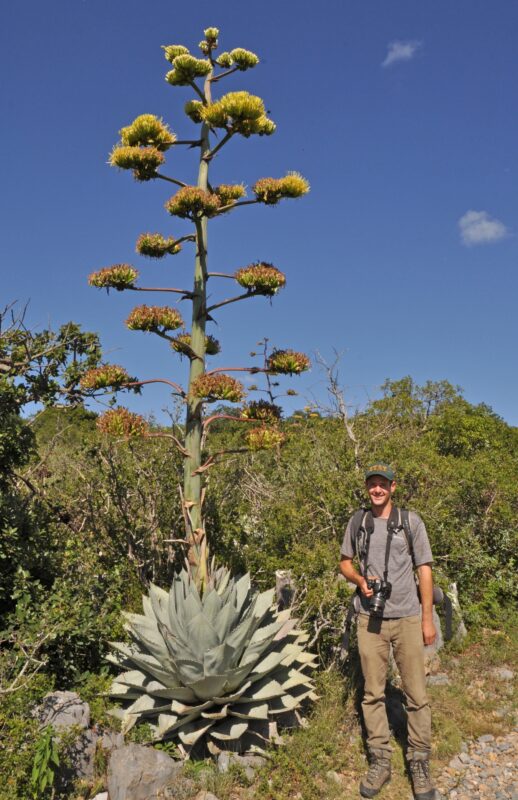