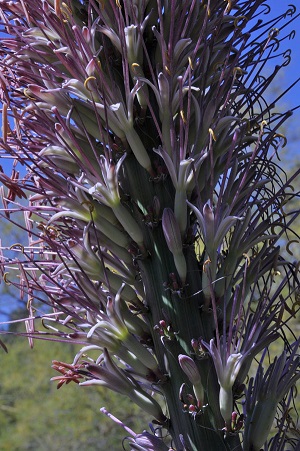 As is too often the case in the plant world, there is much confusion regarding the naming of this plant.  It was first named as Agave nickelsiae in 1895, but was re-named as Agave ferdinandi-regis by Agave expert Alwin Berger in 1915.  Later authors, notably including Howard Scott Gentry, considered it to be merely a form of Agave victoriae-reginae, not even meriting the rank of a subspecies or variety.  Recently, however, a group of Mexican botanists have noted the significant floral differences between the plants, and they have concluded that A. nickelsiae should be recognized as a separate species.

Both Agave nickelsiae and Agave victoriae-reginae are notable for their compact rosettes with striking white lines which look as though they had been painted on the surface.  However, in A. nickelsiae there are fewer leaves in a rosette, and these tend to be narrower, longer, more splayed, and often with a milky-bluish tinge.  A. nickelsiae usually also has a more prominent black spine at the tip of the leaf.  In both species, the leaves sometimes have a double tip or even a triple tip.

As with many kinds of Agave, Agave nickelsiae and A. victoriae-reginae have surprisingly tall flower stalks 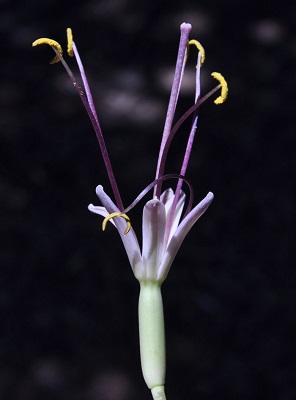 The flowers between the two species are significantly different, and this is perhaps the strongest reason for separating them.  Those of Agave nickelsiae are larger (listed as being 1⅔ to 1¾ inches long from the base to the petal tips, and ours exceed this at just over 2 inches), with the petals fanning out widely at the mouth, while the smaller flowers of A. victoriae-reginae have erect petals.  The flower color differs as well.  At the bud stage, A. nickelsiae flowers have a purplish tinge, and when they open this color is evident on the outsides of the petals (on the whole surface of the outer 3 petals, and on a stripe down the center of the inner 3).  The inside of the flower is mostly off-white, but with a purple tint toward the tips.  The stripe down the middle of the inner 3 petals is repeated on the inside, but it fades from purple to greenish going downward.  The flowers of A. victoriae-reginae, in contrast, are white to greenish-white.  In Agave nickelsiae the stamens extend far beyond the petal tips, showing off the purple filaments, while the 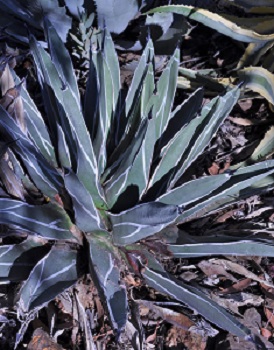 stamens of A. victoriae-reginae extend only a little beyond the tips, with white filaments.

Agave nickelsiae is a slow-growing plant, and our blooming specimen took perhaps 20 years to reach maturity.  It will die after completing its flowering cycle, but happily it has produced a few offsets to allow for its continuance in the garden.