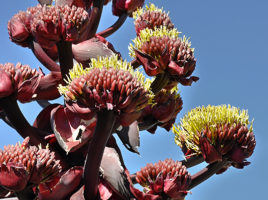 There are a few species of Agave, all from mountainous areas in northern Mexico, which share an unusual character: their flower stalks emerge in the fall and grow part-way up, then pause to wait out the winter, with large fleshy overlapping bracts covering the tip. The following spring, these plants resume growth after the weather has warmed up, pushing out floral branches with clusters of flowers at their ends. One such species is Agave montana, found in the Mexican states of Nuevo Leon, Tamaulipas and Queretaro. 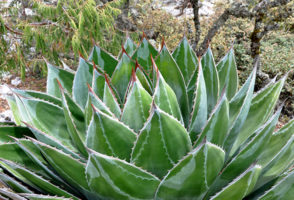 Agave montana is closely related to Agave gentryi, which is much more widespread and grows at a slightly lower elevation. Though the flowers of the two species look similar, A. gentryi has larger rosettes with longer leaves, and it often makes offsets at the base. In contrast, the rosettes of Agave montana are much more compact, and the plants always remain single.

A mature plant of Agave montana is a solitary rosette about 4 to 5 ft. in diameter (1.2 – 1.5m), with a height of about 3 to 4 feet (.9 – 1.2 m). The green leaves are broad but short, with sharp teeth along the margins and a stout spine at the tip. They have striking bud-printing (this refers to the embossed impression on the leaf surface made by the adjacent leaves as they develop in the cone at the growing tip), and in some plants the impressions are outlined in frosted blue, which produces a wonderful effect. 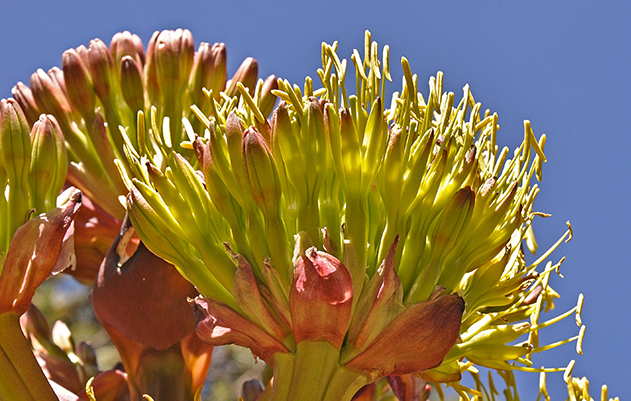 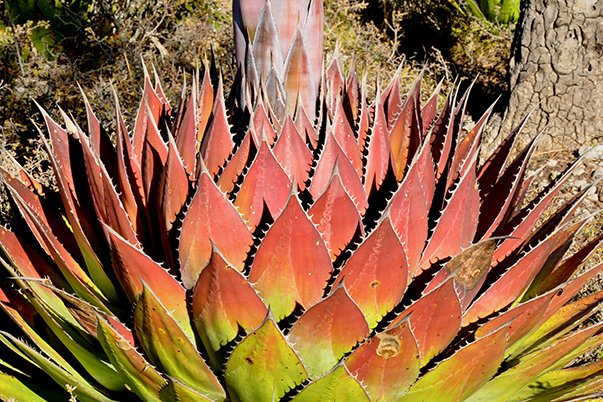 Agave montana with leaves turning red as it flowers

The floral branches and buds of Agave montana are a dark purplish-red color, but when the flowers open they show off their yellow interiors and stamens and pistils. In some cases, the whole flower turns yellow at maturity. The contrast between the dark red and vivid yellow is quite striking. On some plants, the floral branches are very short, and the flowers are half-hidden behind the large bracts cradling them, but on other plants the branches are longer and extend well beyond the bracts. Though many plants do not change color when they flower, a few turn fiery red.

The seed pods of A. montana are brown and shaped like little blimps, and at maturity they split open, allowing the disc-like black seeds to spill out. 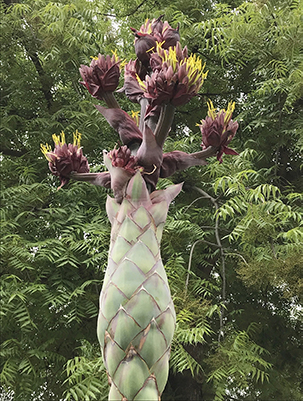 Agave montana coming into flower at the Ruth Bancroft Garden.

Our flowering plant at the Ruth Bancroft Garden is unusual in a couple of respects. First, it did not follow the usual script in the timing of its flowering. It started sending up a stalk in the fall of 2016, pausing before winter as it should, but then it never resumed growth in 2017, sitting out the whole year with a curious-looking 6-foot club emerging from the rosette. Finally, in April 2018 it decided it had waited long enough, and its progress toward flowering resumed. The first flower opened on May 18th. The other unusual thing about our plant is its small size, with a diameter of only 34 inches (.87 m) and a flower stalk which tops out at 9½ feet (2.9 m). A more typical plant would have a stalk with a height of 11½ to 15 feet (3.5 – 4.5 m).