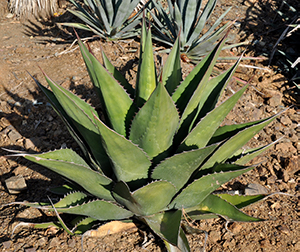 Agave gentryi is a large species originating in the mountains of northeastern Mexico, where populations occur in five states: Coahuila, Zacatecas, Nuevo Leon, San Luis Potosi and Tamaulipas. It is variable with regard to size, leaf shape and leaf color. At some localities, plants are compact, with oval leaves that taper to a sharp tip. In other places, the leaves are longer and narrower, more lance-shaped than oval. 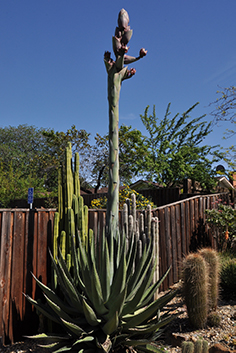 Large specimens may reach 6 feet in height (1.8 m), while small ones top out at 3 feet (.9 m). This species is not a prolific producer of offsets, but it usually makes a few immediately adjacent to the mother plant. The leaf color ranges from yellowish-green to dark green to bluish- or grayish-green.

Agave gentryi is among the few species that flower in two stages. The stalk begins to shoot upward in the summer of one year, and then ceases growth in the fall, with a cluster of large fleshy bracts protecting the tip. 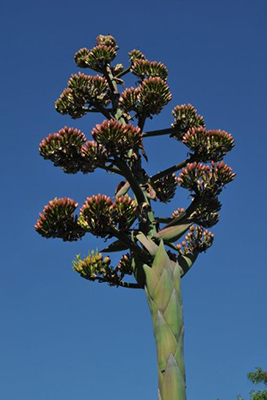 After waiting out the winter looking like a giant asparagus shoot, the stalk resumes growth in the spring, sending out short side-branches ending in clusters of yellow flowers which are red-tipped at the bud stage. The stalk may attain a height of up to 18 feet (5.5 m), though it is often shorter than this.

The stalk and flowers of A. gentryi greatly resemble those of Agave montana, but the latter plant is of shorter stature and in habitat it always seems to remain single, though it can sometimes put out an offset in cultivation. 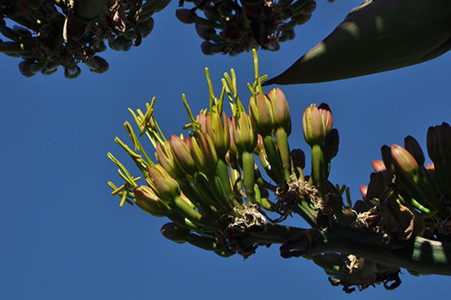 Our flowering specimen at the Ruth Bancroft Garden comes from the mountains to the northeast of Doctor Arroyo, in the southern part of the state of Nuevo Leon. It has narrower, more sword-like leaves than usual. It came as an offset of a plant at Yucca Do Nursery in Texas, and was planted out in 2007.