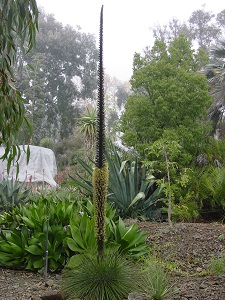 Though it was described and named back in 1817 from a plant cultivated in Europe, the native habitat of Agave geminiflora was long unknown until it was found in the Mexican state of Nayarit in 1951.  More recently, plants have also been found in the neighboring state of Jalisco, to the northwest of Guadalajara.  Its native habitat is open oak woodland.  Though rare in nature, it does very well in cultivation and is widely grown for its decorative “spike-ball” appearance, often enhanced by white curling fibers peeling from the margins of the leaves.

In nature Agave geminiflora is typically found as a single rosette which dies after blooming, but in cultivation it may sprout new shoots from among the leaves after it has flowered, forming a clump.  While the leaves of some agaves start to wither even as they are flowering, those of A. geminiflora can stay green for a long time afterward.  If new shoots are produced around the base of the stalk, this may not happen for a year or two. 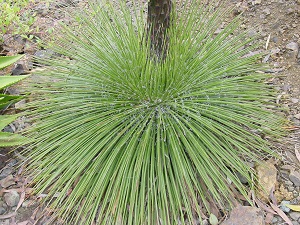 about ¼ inch across (7 mm) in the lower part of the blade, narrowing upward and sharp at the tip.  In many specimens white thread-like fibers curl from the edges of the leaves, creating an ornamental effect, but sometimes these are absent.  The rigidity of the leaves is also variable; in some plants they radiate out stiffly from the center, while in others they are more flaccid.

Many Agave species flower in summer, but Agave geminiflora blooms in the fall, with its stalk rising to a height of 12 to 18 feet (up to nearly 6 m).  Like other members of the subgenus Littaea, it has no floral branches, so that the flowers sprout directly from the stalk. The stalk is quite stout, with a diameter of 3½ inches or more (9 – 12 cm), and the flowers are borne in pairs along the 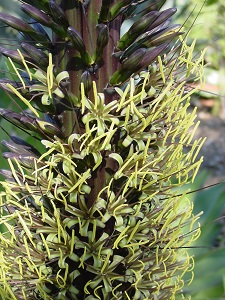 greater part of its length.  The paired flowers are the source of its name, since “geminiflora” means twin-flowered.  The buds are a dark purple color, and the mature flowers have an underlying green color on the outside, tinted purple (especially toward the tips).  When the flowers open, the petal tips curl back to reveal the pale yellow or white (or greenish-white) face of the flower, sometimes tinged with pink or purple.  The stigma and filaments are purple or reddish-purple, with the large anthers bearing pale yellow pollen.