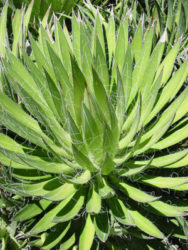 Agave filifera is a clump-forming species from central Mexico, native to several mountain ranges to the north and northwest of Mexico City. It is closely related to Agave schidigera, which has a more extensive area of occurrence farther to the west, but A. schidigera is single-headed and has somewhat longer leaves which are more slender. Both plants have fibers which curl from the edges of the leaves, but these tend to be finer and less conspicuous with Agave filifera. 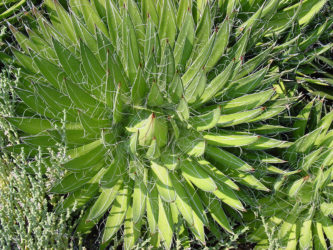 A well-established plant of Agave filifera develops into a mound of many modest-sized heads of leaves which are tightly packed together. The sharp-tipped leaves are 6 to 12 inches long (15 – 30 cm) and quite rigid. They are deep green in color, and adorned with lengthwise white markings, as well as the threads at the margins (filifera means “having threads”). The markings on the leaf surface are lasting impressions of where adjacent leaves pressed against it as they were developing at the center of the plant. 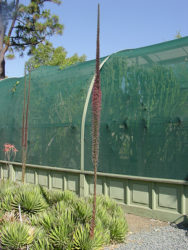 At maturity, the center of a rosette elongates and shoots upward to form a flower stalk, and this is about 6½to 8 feet tall (2 – 2.5 m). The stalk is dark purple, as are the flower buds arrayed along it, with the flowers opening in sequence from bottom to top over the course of about a month. Unlike many other species of Agave, A. filifera does not have a set time of year for coming into flower, and at the Ruth Bancroft Garden we have had it bloom from late spring to late fall in various years. Each flower is angled upward and outward from its point of attachment to the stalk, and when it opens, the six tepal-tips curl back to show off the face of the flower [note that the word “tepals” is used for flowers where there is not a clear distinction between petals and sepals]. While the stalk, buds, stamens and pistils are all dark purple 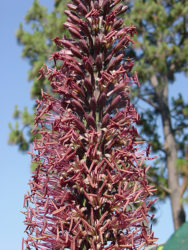 or wine-colored, the face of the flower is a pale yellow, though it too may be flushed with purple. The flowers are about 1⅓ inches long (3.3 cm) from the base to the tepal-tips, with the stamens and pistils extending well beyond this.

Agave rosettes are monocarpic, meaning they come into flower only once at the ends of their lives, and then die afterwards. With Agave schidigera, this is the end of the line, since it normally has no offsets to carry on. With Agave filifera, however, more new heads are produced each year than the number which flower, so the clump keeps expanding over time. It is easy to remove heads and pot them up or plant them separately, so this species can be propagated readily. It is cold-tolerant down to at least 20°F (-7°C), and is not fussy about soil type, though good drainage is always preferable. It does well in full sun or partial shade.