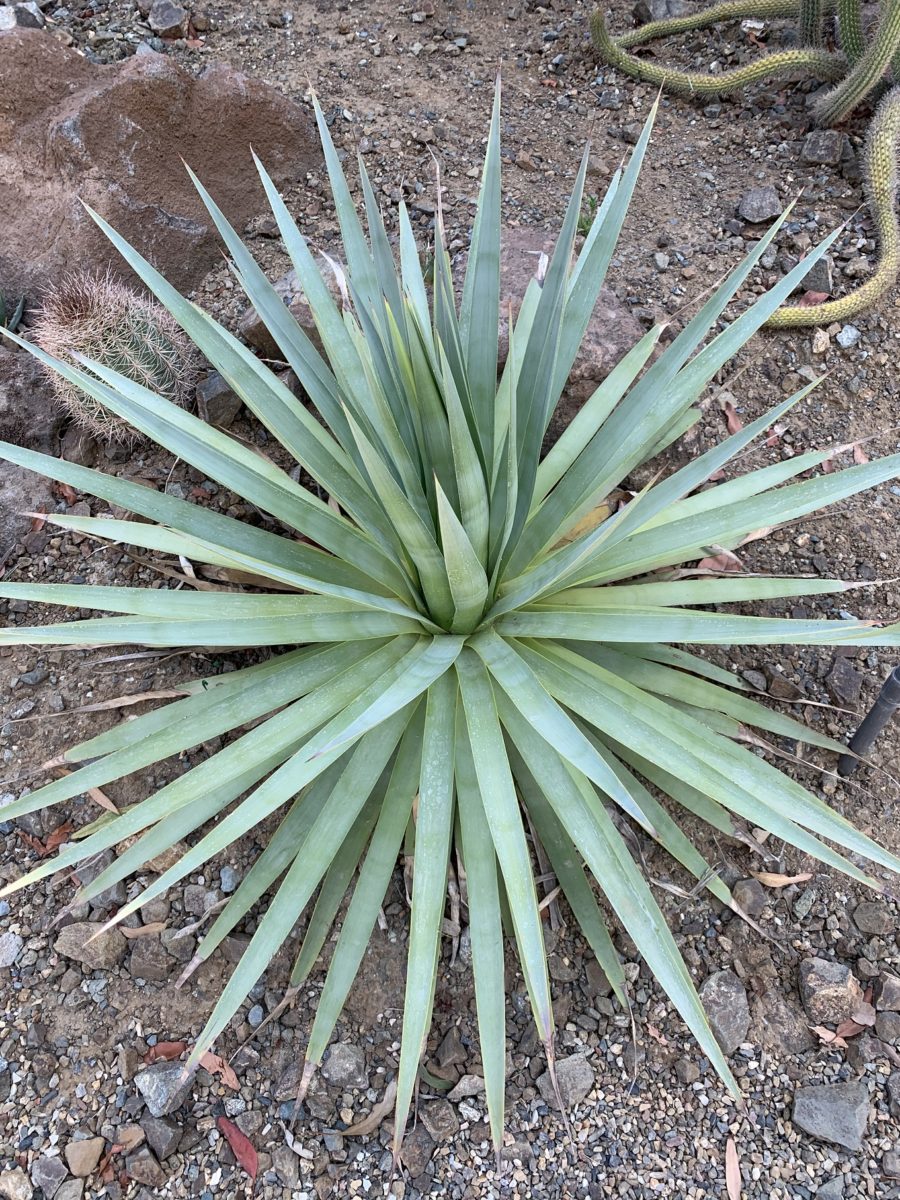 In 1982, when Howard Scott Gentry published his book Agaves of Continental North America in 1982, he placed the various species of Agave in groups of related plants. One of these was the group Striatae, which at that time had only three species: Agave striata, Agave stricta, and Agave dasylirioides. Both A. striata and A. stricta have narrow needle-like leaves, leaving A. dasylirioides as the non-conformist with its flat-bladed leaves. In the decades since, seven more species belonging to this group have been described, some with needle-like leaves and some with flat blades. None of these species has the large marginal teeth so often seen in the genus, but the flat-bladed ones have tiny serrations along their margins, and when transplanting them or working around them, one must take care to avoid their ability to slice skin. With Agave dasylirioides, this potential danger is not much of a concern when it comes to plants in nature, since they grow on sheer cliffs; getting close enough to even touch a plant is a challenge.

Agave striata has long been cultivated widely, and it multiplies by dividing at the growing point, so that in time a many-headed clump develops. The heads can be separated and re-planted, making the species easy to propagate. In contrast, Agave dasylirioides is single-headed, and when a plant flowers one must start over again from seed, since this is the end of its life-span. At the Ruth Bancroft Garden we have many plants of A. striata, and it is quite routine for plants to come into flower. In contrast, 2020 marks the first year we have ever had A. dasylirioides come into bloom, so this makes it a special occasion for us.

The stemless rosettes of Agave dasylirioides are up to a little over 3 feet across (1 m) at maturity, with 70 to 100 stiffly-radiating sword-like sharp-tipped leaves. The thin leaves are glaucous green or glaucous blue-green, with a width averaging 1 inch (2.5 cm) and a length of up to 2 feet (60 cm). The leaf width on a wide-leaved plant may be as much as 1½ inches wide (3.8 cm) at the widest point. The leaves have a narrow pale-yellow margin with minute teeth, small enough that they are not noticeable from a distance.

When a plant begins its flowering process, the central growing point rapidly elongates and forms a stalk, which ultimately reaches a length of up to 80 inches (2 m). The shaft of the stalk is initially hidden by many narrow pliable bracts, which are purple-tinged and 4 to 6 inches long (10 to 15 cm). As the stalk elongates, the spacing of the bracts increases, and the purplish shaft becomes visible. Rather than rising straight up, as with most Agave species, the flower stalk arches to the side. The upper portion, where the flowers are located, points downward.

At the bud stage, the flowers are green, but they lighten as they mature. When fully open, the flowers have a green cylindrical lower portion, and within are the ovaries. Above this is a cup formed by the fused lower halves of the tepals (for flowers such as those of agaves which lack separate and distinct sepals and petals, the neutral term “tepals” is used). In their upper halves, the tepals separate into six rounded tips which flare outward, with a color that ranges from pale yellow to pale greenish-yellow. Within the cup are the six stamens, which protrude well beyond the tepal tips and are topped with the light yellow pollen-bearing anthers. Amid the stamens is the equally long cylindrical pistil, with its sticky tip ready to receive pollen.

If pollinated, the lower part of the flower swells to become an oval seed pod a little less than an inch long (2 cm), with the shriveled pistil, stamens and tepals remaining in place at its apex. After maturing for a few months, the pod turns from green to brown, splitting open to release the D-shaped flat black seeds.

In habitat, Agave dasylirioides can be found growing on sheer cliffs to the north of Cuernavaca (south of Mexico City), with its flower stalks arching out over the abyss. This area receives about 35 inches (900 mm) of annual rainfall, mostly in the summer and fall months, and winter lows do not get down to freezing. However, in cultivation A. dasylirioides does not mind the winter rainfall of California’s Mediterranean climate, as long as it receives some irrigation in summer, and it can endure overnight lows at least down to 27°F (-3° C). 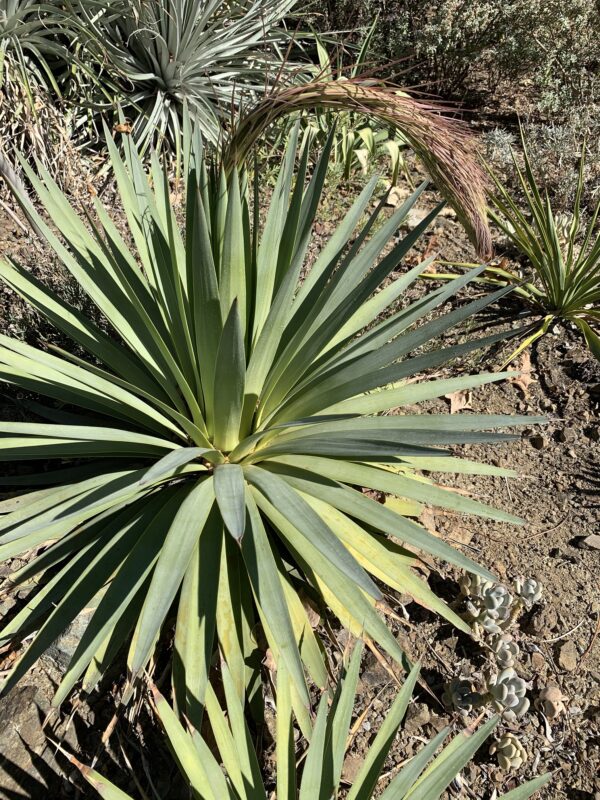 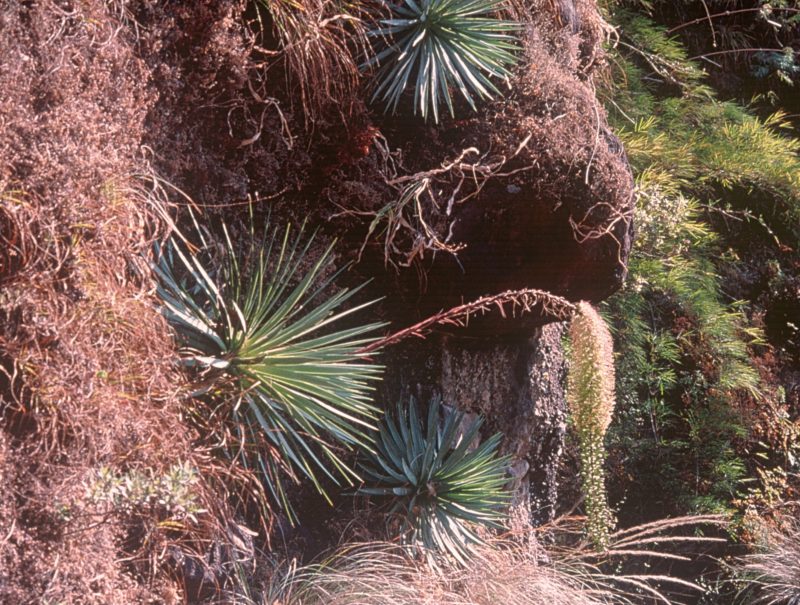 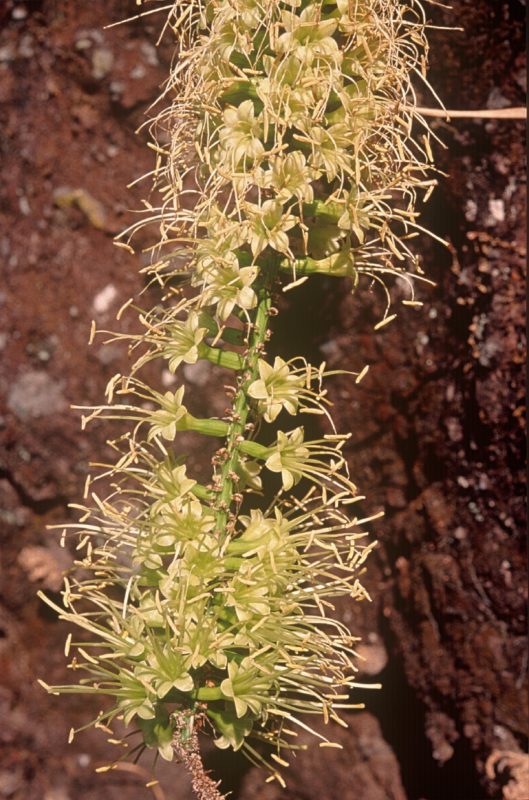