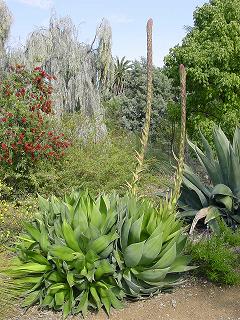 Agave is a large genus with over 200 species, and within it there are clusters of species called Groups.  One of these is the Group Polycephalae, occurring mostly in eastern and southern Mexico.  Members of the Polycephalae generally have leaves which are less rigid than most other kinds, and the plants often will sprout new heads from between the leaves of a mature head after it flowers.  In other groups, the head simply withers after flowering, although it may have produced offsets around the base which will continue to grow.  The Polycephalae have flower stalks in which the flowers sprout directly from the main stalk, rather than growing in clusters at the ends of side-branches.

One of the species in the Polycephalae which has grown very happily at the Ruth Bancroft Garden is Agave chiapensis, named after the state of Chiapas in southern Mexico, between Oaxaca and the Guatemalan border.  Plants of Agave chiapensis have smooth green or bluish-green leaves up to 2 feet long, armed with small but sharp 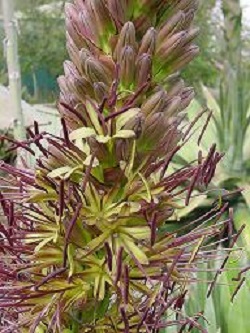 dark brown teeth along the edges and with a spine at the tip.  Plants seem to be less rigid about their flowering time than most other kinds of agaves, but they usually do flower during the spring and summer months.

The flower stalk is dark in color, with buds which are a dark purple or reddish-purple.  When the flowers open, the tepals (or petals) spread widely to reveal the pale yellow color of their inner surface, contrasting with the purple of the buds, stamens and pistil.  Flowering begins at the bottom of the flower stalk and progresses slowly upward over the course of a couple of months.