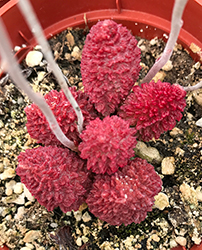 Adromischus is a modest-sized genus of small plants in the Stonecrop Family (Crassulaceae), notable for its array of wonderfully spotted or textured leaves. The 28 recognized species are all native to South Africa and neighboring Namibia, occurring both in summer-rainfall and winter-rainfall regions. These plants have slender spikes of tubular flowers which are generally not showy, but they appeal to collectors because of their chubby leaves, which may be cylindrical, spoon-shaped, disc-like or blimp-like. Many of them have attractive spots or blotches, but one called Adromischus marianiae forma herrei is fantastically textured, with its leaves often flushing dark red. 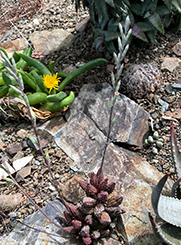 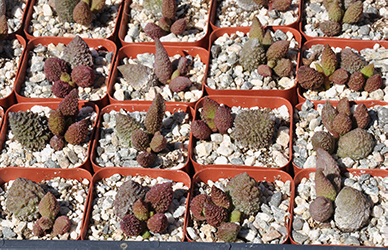 Adromischus marianiae forma herrei is a short-stemmed miniature clustering plant, with leaves up to 2 inches long (5 cm), but usually less. It looks best if grown in bright light, so that its leaves are tightly bunched together. Depending on the clone and the growing conditions, plants may be green, red, purple, or almost black, and the leaves can vary from short and almost round to lemon-shaped or more elongated. Plants seen in collections typically have leaves which are red-tinged and lemon-shaped. In all cases, the leaf surface is roughened by bumps and ridges which give it a unique and extraordinary appearance. 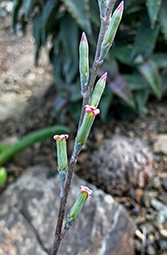 A. marianiae forma herrei blooms at the end of summer and into the fall, with the slender stalk arising from the center of the rosette. The erect stalks are as much as a foot high (30 cm) and have a waxy coating that makes them look whitewashed, though this coating wears off in time. The little tubular flowers are spaced along the stalk, and they angle upward and a little outward from their point of attachment. The floral tube is pale green over most of its length, but is sometimes reddened toward the top, where the five petals curl back and show off their pink coloration.

Like other kinds of Adromischus, A. marianiae forma herrei can be propagated from its leaves, which detach readily and are easily rooted. A little patience is required, however, since the rooted leaf takes its time producing a new little plant.