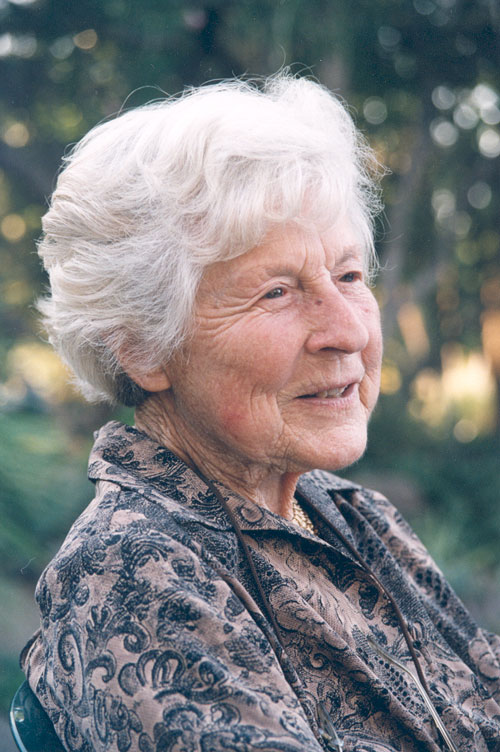 Ruth Petersson was born in 1908 and was raised in Berkeley. Ruth developed an appreciation for plants at a very early age. She studied architecture at the University of California, Berkeley. While she was in college, the stock market crashed. Uncertain she could get work as an architect during so difficult a time, Ruth changed her major and graduated with a teaching degree. While teaching home economics in Merced, she met Philip Bancroft, Jr. on a blind date, and the two married in 1939 and moved to the family farm in Walnut Creek.

Ruth began gardening right away, and planted a large garden around the main house in 1950. Her interest in different plant groups evolved over time to include bearded irises, roses, herbs, alpine plants, perennials, and more. In the 1950s, Ruth purchased her first succulent, a single potted aeonium. She quickly became fascinated with water-conserving plants and began collecting them. She amassed a huge collection of potted succulents, which were grown in lath-houses and greenhouses around her house.

In 1971, the last walnut orchard on the property was cut down, and Philip offered Ruth the three acres to begin a new garden using her large collection of succulents, which had outgrown their space. Ruth, then in her 60s, seized this opportunity. She enlisted Lester Hawkins, co-owner of Western Hills Nursery, to design the layout of pathways and garden beds. Ruth herself chose the plants, many of which were planted out from one gallon containers. In the early 1970s, Philip built Ruth’s Folly, the wooden structure that marks the traditional entrance to the garden.

By trial and error, Ruth discovered how to use succulents in the landscape and how to protect tender plants from winter rains and the occasional hard freeze. She created dynamic planting combinations by using contrasting textures, forms, and colors.

Ruth’s garden began to attract a great deal of attention from other gardeners and horticulturists. In 1988, Frank and Anne Cabot visited Ruth and were troubled to hear that there were no plans to preserve the garden. They were inspired to form the Garden Conservancy, a nonprofit dedicated to preserving significant American gardens, and The Ruth Bancroft Garden became the first preservation project of the newly formed organization. The Garden opened to the public in the early 1990s.

Today, The Ruth Bancroft Garden, Inc. is a 501(c)(3) nonprofit which owns the garden and raises funds for its preservation. The garden is protected by a conservation easement, which ensures that the property will always be a garden and will be preserved in the spirit of its founder, Ruth Bancroft. The Garden has become an outstanding example of a water-conserving garden, appropriate for our Mediterranean climate. The Garden also houses important collections of aloes, agaves, yuccas, and echeverias. Aeonium ‘Glenn Davidson’, the first succulent in Ruth’s collection, is still growing in The Garden.

Visit Ruth’s Celebration of Life page to see how we honored Ruth this past fall. To learn more about Ruth Bancroft and her garden, read this oral history (part of the California Horticulture Oral History Series) available through The Bancroft Library of the University of California, Berkeley.